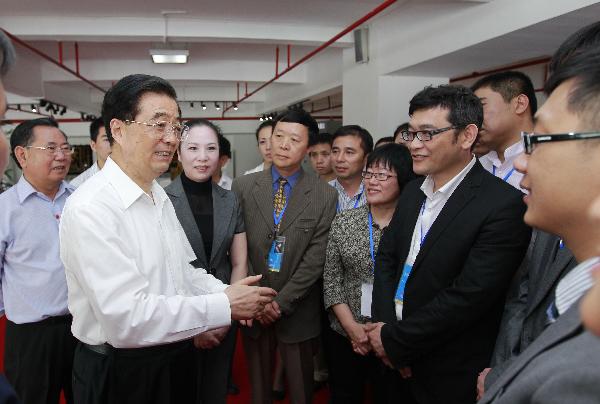 Hu, also general secretary of the Communist Party of China (CPC) Central Committee, visited the countryside and local businesses on Friday and Saturday after attending the BRICS Leaders Meeting in Sanya and the annual meeting of the Boao Forum for Asia.

The BRICS group includes Brazil, Russia, India, China and South Africa. The non-governmental and non-profit Boao Forum for Asia, founded by 28 nations in 2001, has become an important platform for discussions on key topics in Asia and the world.

In Hainan, Hu showed his concern for the lives of people hit by serious floods last October. He said that villagers’ unswerving spirit in the face of natural disasters was valuable and he hoped that local people could further develop fruit and vegetable production in order to boost incomes.

At Hainan International Port of Creativity, Hu said that the creative industry was "an emerging sector" boasting rosy prospects, and that innovative systems and scientific and technological support were key to the industry’s vitality.

Regarding the island’s first high-speed rail line, Hu ordered government departments to "make all efforts to guarantee its safety" and crack down on corruption.

Hu said that the CPC Central Committee has made a strategic decision to build Hainan into an "international tourism island," Hainan should seize the opportunity to "explore tourism resources, improve infrastructure and regulate the tourism market order" under the precondition of protecting the environment so that the island can become a "world-class holiday resort."