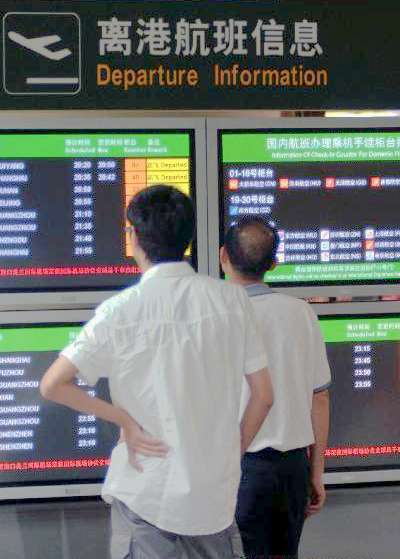 Passengers checked the departure information of Meilan Airport in Haikou,
south China’s Hainan Province, July 21, 2010. Due to Typhoon Chanthu,
16 flights have been cancelled in Meilan Airport.
HAIKOU — The southern Chinese provinces of Guangdong and Hainan are bracing themselves ahead of typhoon Chanthu’s expected landfall Thursday.

All 26,126 fishing boats in the island province of Hainan have returned to port, the provincial flood control and drought relief headquarters said.

The typhoon has disrupted air travel, shipping and railway services.

Sixteen flights in and out of Haikou Meilan International Airport had been canceled as of 7 p.m. Wednesday, airport officials said.

The Qiongzhou Strait between the Mainland and Hainan island was closed to shipping from 10 a.m. Wednesday.

Chanthu strengthened into a typhoon from a strong tropical storm at about 5 p.m. Wednesday when it was 220 kilometers southeast of Hainan’s Wenchang City, according to Hainan meteorological authorities.

Winds at the center of the typhoon are about 199 kilometers per hour.

Chanthu, the third tropical storm of the season, is forecast to move northwest at a speed of 15 km per hour, according to a statement on the website of the China Meteorological Administration.

It is expected to make landfall between the Guangdong coastal city of Yangjiang and Hainan’s Qionghai City sometime Thursday.

The typhoon will bring gales and heavy rains to southern and eastern coastal areas of China, including Hainan, Guangdong and Guangxi, over the next 24 hours.

The statement said coastal areas in Guangdong are likely to be worst affected.

Authorities in Hainan have ordered checks of reservoirs and the evacuation of residents in low-lying areas and dangerous buildings.

People in the affected areas are advised to shut doors and windows and to avoid outdoor activities.

Next news: The nose flute of Hainan