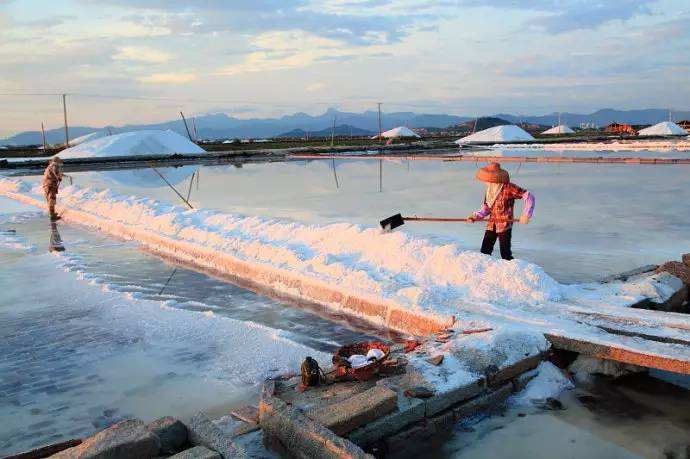 A panic buying of salt that swept parts of China in the past two days died down Friday as salt supplies were increased and rumors that iodized salt could guard against nuclear radiation were denied.

At a Wal-Mart outlet in Beijing's downtown Xuanwumen area, shoppers holding a few packs of salt can still be seen, but the long queues from the recent salt rush vanished as of 9 am on Friday, shortly after the supermarket opened.

Salt packs were removed from the shelves and only hand-delivered to customers by store employees.

"Two packs at most for each purchase," reads a nearby notice board.

"We replenished our inventory of salt last night and the price remains 1.3 yuan (20 US cents) a pack as usual," said a salesman who did not give his name.

"I learned from the news broadcast last night that Japan's nuclear crisis won't have much influence on China's salt safety, and eating iodized salt will not help in reducing radioactive poisoning. That's why people stopped snatching up salt," said a nearby resident, Liu Tong.

However, things were totally different just one day ago. A rumor circulated, saying that iodized salt could ward off radioactive poisoning and triggering widespread panic buying in some cities in China.

As a result, supermarkets and smaller stores in cities such as Beijing, Shanghai had run out of salt by Thursday.

The panic buying started in provinces and cities along the east coast and spread quickly to inland areas. Even Urumqi, the capital city farthest from Japan in northwestern Xinjiang Uygur autonomous region, was also caught up in the supply disruption.

The Chinese government, however, mobilized quickly to respond to the crisis.

On Thursday, the country's largest salt maker, China National Salt Industry Corp, reassured the country that there were ample salt reserves and said "panic buying and hoarding is unnecessary".

China's Ministry of Health became involved, too, clarifying in a statement that taking table salt would do little in preventing radiation poisoning.

Since there is a small quantity of iodine in salt, an individual would need to consume about three kilograms of salt at one serving, which is impossible, to obtain enough iodine to prevent radiation poisoning, said the ministry.

The National Development and Reform Commission, the country's top economic planner, ordered in an urgent notice issued on the same day to crack down on hoarding of salt and spreading of rumors.

The commission asked local price control authorities to counter rumors about shortages of daily necessities and the hoarding of these goods.

Further, the Beijing municipal government set up an emergency response center Thursday afternoon to speed salt distribution to the city's more than 3,000 supermarkets and stores throughout the night.

The price supervisor in south China's Hainan province also warned of fines up to two million yuan for companies that hiked prices for unlawful profits.

The response of governments at all levels proved to be effective, as most supermarkets in provinces like Sichuan, Jiangxi and Zhejiang were supplied with substantial amounts of salt by Friday morning.

Xu Fengxian, a senior fellow researcher at the Chinese Academy of Social Science, said the government's response to the crisis was quick and effective.

However, the government should go a step further in transmitting their message on salt to people who are less informed by public media.

"For example, the government can hand out brochures at community levels to ease the worries of those who don't read much," Xu said, adding that these people are more easily instigated to join in panic buying.

Professor He Zhenbiao at Zhejiang University said the public's fears over their safety and lack of nuclear knowledge are both to blame for the panic buying.

"The government should convey messages to the public more clearly and in a more easily understandable way to avoid mistrust or doubt," He said.

Xu also noted that the government should put in place a monitoring mechanism to keep a close eye on any signs that might stir chaos.

An article that was posted on a Jiangsu-based salt company's website was traced and criticized by Internet users for fueling the panic buying.

The article touted and encouraged people to ingest iodized salt, which it claimed could ward off radiation.

"It is really a great challenge for the government to learn and master how to cope with a crisis like this," Xu said.