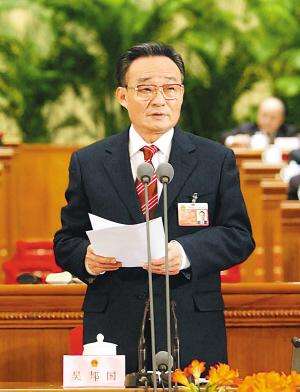 Top legislator Wu Bangguo and other Chinese leaders on March 11 joined in panel discussions with deputies to the National People's Congress (NPC), the top legislature, during the NPC's annual session.
In a discussion with the NPC delegation from the southern province of Hainan, Wu, chairman of the NPC Standing Committee, said the NPC's work was at a new starting point.
He said more prominence must be given to revising and improving laws as well as enacting supportive statutes to help the socialist system of laws with Chinese characteristics keep abreast with the times.
Further, Wu said supervisory work must be more relevant to the overall situation and livelihood issues to facilitate the implementation of the decisions and arrangements of the central authorities.
SOURCE: en.hainan.gov.cn
Editorial Message
This site contains materials from other clearly stated media sources for the purpose of discussion stimulation and content enrichment among our members only.

Next news: Good breakfast is the key to a healthy lifestyle – research