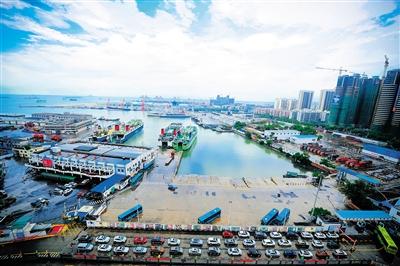 At Xiuying Port in Haikou, capital of the southernmost island province of Hainan, long queues of vehicles were waiting for ferries.

"I arrived home on the Lunar New Year's Eve, just in time for the family gathering, but I have to be back at work Tuesday," said Fu Haiming, an islander who works in Sanya, in the southern Hainan Povince.

The tide of travelers has again made train tickets off the island a rare commodity.

Jiao Guobao and his wife stepped out of a crowded train that pulled into Beijing Western Railway Station before dawn Monday, almost two weeks before the Lantern Festival, the official end of China's Spring Festival holiday.

The couple had spent only a week with their family in Zhengzhou, capital of the Central Henan province.

"We came back early to see if we could find better-paid jobs," said Jiao. "It was also easier to get train tickets."

The couple have been working in Beijing for four years. Jiao has had several jobs at construction sites, logistic companies and security firms. His wife, Du Caifeng, is a domestic help, babysitting, cooking and cleaning home for urban families.

"The intermediary service said Beijing is short of domestic help during the holiday season. It's a big chance for a pay rise," said Du.

The Beijing-bound train was not "half empty" as the couple had expected.

"The migrants used to wait until after the 15th day of the Chinese Lunar New Year to return in order to celebrate the traditional Lantern Festival with their families," said Song. "But this year, many people have chosen to return in advance."

Ren Hongjun, a peasant from neighboring Hebei Province, is among the early arrivals.

"My son will enter college this fall. I must work harder to pay for his tuition," said Ren, who has been selling pancakes in Beijing for three years.

As the migrant millions hit the road again Monday, the fifth day of the Lunar New Year, China renewed its celebrations with more dumplings and fireworks to drive away malevolent spirits.

At a long distance bus terminal in Kunming, capital of the Southwestern Yunnan province, crowds of passengers were seen queueing for tickets at all eight windows all during the day. "Most are migrants ready to get back to their city jobs. It was less crowded yesterday," a ticket seller said.

The Chengdu Railway Station, a pivotal hub in southwest China, has reported a steady rise in passenger volume since Saturday. On Sunday alone, more than 100,000 people traveled out of Chengdu, an official with Chengdu Railways said.

Though the exact number of Monday's passengers was unavailable, the official said the station was well-prepared for the hordes of migrant workers and students. "Most of them travel to Beijing, Shanghai, Urumqi and boom towns in the eastern Zhejiang and Jiangsu provinces."

Jiang Shougui called his wife in Sichuan's Suining before boarding a train to Shenzhen, reminding her to take care of their newborn baby and not to worry. "When the child grows older, they will join me in Shenzhen."

Unable to obtain train tickets either to their home in Shandong province or to Guangzhou, Chen Shanmiao, whose family of nine were on a sightseeing-tour of Hainan, decided to board a ferry and travel by bus to Guangzhou, where they would see whether to travel home by train or plane.

"The railway authorities should arrange more trains on the busy routes," said Chen. "Otherwise traveling will remain a headache every year."

According to the Ministry of Railways, 6.2 million journeys have been made on 4,531 trains since the Spring Festival rush began on Jan 19, up 11 percent and 15 percent respectively from the same period last year.

The real travel rush is expected Tuesday and Wednesday.

Despite widespread criticism of the lack of train tickets, a ministry spokesman said high-speed trains had eased the bottleneck to some extent.

He said the railway system would prove even faster and more efficient with the scheduled 2011 opening of high-speed trunk routes linking Beijing and Shanghai, and Harbin and Dalian.

SOURCE: europe.chinadaily.com.cn
Editorial Message
This site contains materials from other clearly stated media sources for the purpose of discussion stimulation and content enrichment among our members only.
whatsonsanya.com does not necessarily endorse their views or the accuracy of their content. For copyright infringement issues please contact editor@whatsonsanya.com