Luxury boat show, Hainan Remdez-Vous to kick off in April 2011 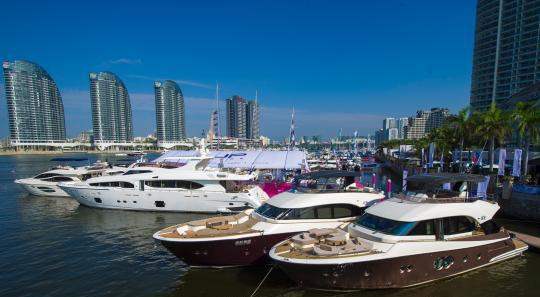 During the first four months of the current nautical year, 12 Azimut Yachts boats from 12 to 35 metres have been sold in China.

The current orders portfolio includes prestigious models such as the new Azimut 88 (a lucky number in China) and an Azimut Grande 116, flagship of the Italian shipyard: the latter will be one of the largest planning yachts ever sold to a Chinese shipowner.

The popularity of the boats proposed by the Group in China has been recently highlighted in the latest number of China Boating, the most authoritative nautical magazine in China: its list of the top 30 luxury yachts comprises 10 boats by Azimut Yachts, defined as the top player in the country. In fact, the orders recorded in Asia during the last 5 months are equivalent to 96% of the total turnover for the previous season with a 200% growth forecast for the current year.

Confirming the success of the Group in China, on 11th January Hurun Report, the exclusive Chinese magazine for High Net Worth Individuals, named Azimut Yachts as the best brand in the luxury nautical sector due to its ability to express the best of Italian style, the excellent performance of its boats and its efficient after-sales service reserved for its shipowners.

The award, which saw the Italian brand alongside examples of international excellence such as Cartier, Louis Vuitton and Rolls Royce, confirms the popularity of Azimut Yachts with the Chinese clientele right from the company's debut in China.

Only a month before the award, an important yacht in the Azimut Grande Collection, an Azimut 105, had been delivered to the most prestigious construction development company in China to mark the opening of a new 6-star hotel in Sanya, the best-known tourist resort in the country on the island of Hainan.

Benetti has also significantly strengthened its presence in Asia to better serve the local clientele which is growing from year to year: in fact 3 Benetti megayachts have been sold recently, two 55-metre steel boats and one 93-footer in the new Benetti Class Range.

In addition, on the occasion of the Hainan Rendez-Vous, the most important Luxury Boat Show in the Far East, scheduled to be held from 2nd to 4th April, the Delfino 93', a Benetti of new generation, will be presented for the first time in China.

"These results are the fruit of the Group's commitment in Asia and in China in particular via direct presence on the ground, an office in Shanghai and the strongest and most expert network of dealers (five) designed to cover a market with obvious potential" says Sebastiano Fanizza, Asia Pacific Area Manager for Azimut Yachts, who continues: "The significant investments made in China, especially in the areas of marketing and service, have been tailored to the culture of these markets where differences can become advantages if they are understood and appreciated."

SOURCE: BYW News
Editorial Message
This site contains materials from other clearly stated media sources for the purpose of discussion stimulation and content enrichment among our members only.
whatsonsanya.com does not necessarily endorse their views or the accuracy of their content. For copyright infringement issues please contact editor@whatsonsanya.com