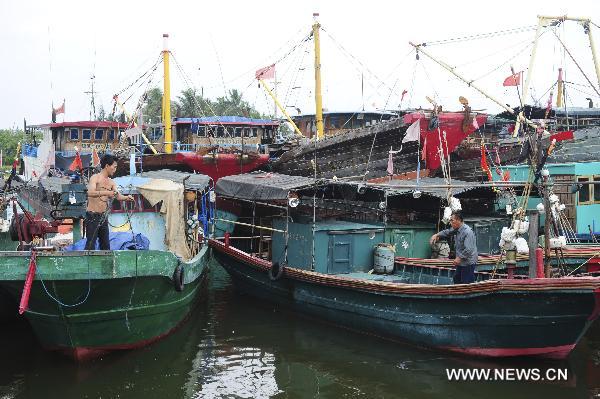 Fishing vessels anchor at Tanmen Port to take shelter from the approaching tropical storm in Qionghai, south China’s Hainan Province, June 22, 2011.
All passenger ships have been forced to cease operations in the south Qiongzhou Strait as of 5 p.m. on Wednesday, due to the gusty winds brought by the fourth tropical storm of the year, "Haima", which formed early Tuesday morning, the local marine bureau of southern Hainan Province said.

Qiongzhou Strait is located between the southern provinces of Guangdong and Hainan.

"The port of Haikou has opened two spare parking lots and is ready to offer relevant services," Wu said.

According to the National Meteorological Center’s broadcast on Tuesday, "Haima" will bring downpours to southern Fujian, southern Guangdong, eastern Hainan, and central and southern Taiwan with wind speeds up to 17.1 meters per second at the Qiongzhou Strait.

At 10 a.m. on Wednesday, the central meteorological office issued a blue-alert warning for the tropical storm.

Also, as of 5 p.m. on Wednesday, Hainan provincial meteorological administration said that due to effects of the tropical storm from Wednesday to Saturday there will be gusty winds up to 24.4 meters per second and rainstorms affecting eastern Hainan, the Qiongzhou Strait, the Beibu Gulf, the Xisha Islands, the Zhongsha Islands and the Nansha Islands.

Furthermore, torrential rains will fall in northern Hainan Province within 24 hours, with the possibility of geological disasters, according to forecast.

At Haikou’s Meilan International Airport, no flights took off or landed from 3 p.m. on Wednesday due to the storm. Six flights were canceled, and five flights were diverted to Nanning and Guilin in Guangxi Zhuang Autonomous Region and Zhanjiang in Guangdong Province.

SOURCE: news.xinhuanet.com
Editorial Message
This site contains materials from other clearly stated media sources for the purpose of discussion stimulation and content enrichment among our members only.
whatsonningbo.com does not necessarily endorse their views or the accuracy of their content. For copyright infringement issues please contact editor@whatsonsanya.com

Next news: Half a glass of wine a day raises risk of breast cancer, study