Updated: 2013-12-26 00:00:00
Kempinski Hotel Haitang Bay Sanya was awarded Best Resort Hotel of the Year at the recent 8th Kingpan Award Ceremony hosted by Times House. Kempinski was the only beach resort in China recognised at the prestigious award ceremony. 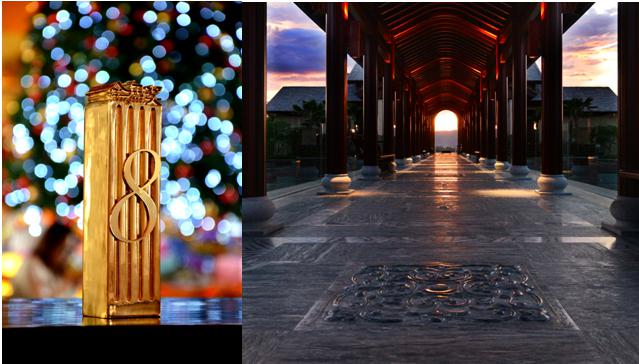 Kingpan Award Trophy                        Long Bridge, the main entrance to the lobby
The Kingpan Award was established in 2006 by the real estate magazine, Times House, and has become one of the authoritative professional recognitions when it comes to property design. Kempinski Hotel Haitang Bay Sanya was exclusively hand-picked from more than 50 hotel properties and won in the national finals following a rigorous eight month evaluation city by city.

“This is the first Chinese style resort property with traditional Fengshui layout in modern setting,” said Cao Jing-lou, the original director of cultural relic protection of the Palace Museum. “The hotel faces South China Sea on one side and Longling Mountains as its backdrop, a rarity in the world with a combination of ancient and modern Chinese art-de-vivre. The wood crafted ceiling in the hotel lobby replicates a sense of majestic and royalty in ancient China, truly this can be the perfect example of combining Chinese design in newer hotels.”

From the palatial-style lobby ceiling with local Li imprints, to the use of rare Rose Wood and real gold, Lu Guang-zheng, China’s famous wood art master, spent three years to design and completed Dongyang wood works throughout the hotel with the helping hands of no less than 600 artists using 300 tons of Silk Wood, 3000 tons of Rose Wood and 300 kilograms of gold.

“Kempinski Hotel Haitang Bay Sanya is not just another beach resort, but is also a living example of Rose Wood art ‘museum’,” said Wu Bing-liang, Vice President of China Art Craft Association. “Dongyang woodcarvings are hailed as national treasures and Kempinski displays many of them.”

Hotel Lobby                                          Qing Dynasty Pagoda
“We believe life is to be lived in style. The mix of cultural flair in our hotel design can certainly take guests back in time with traditional Chinese culture, making their stay not only meaningful but memorable,” said William Latour, General Manager of Kempinski Hotel Haitang Bay Sanya.