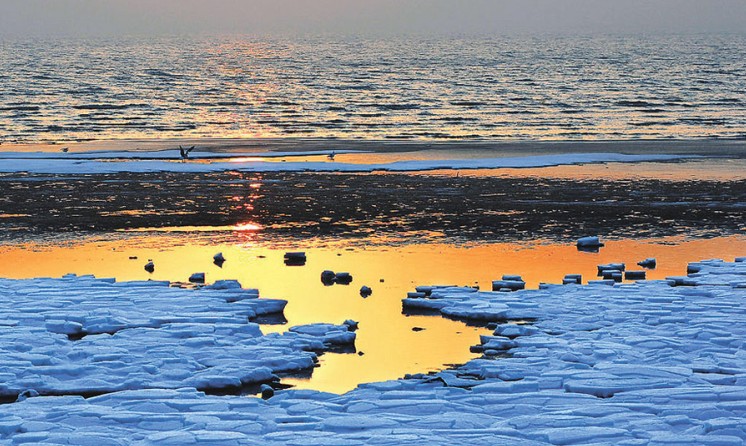 The beach and the seafood may not as well-known as those in Sanya, but also enjoyable in Qinhuangdao.
With Shanghai and the rest of eastern China enveloped in heavy smog recently, many people have yearned for a short getaway for their lungs’ sake. Most people have had to simply heed authorities’ calls to stay indoors as much as possible.

For those that can manage a short trip, some scenic areas aren’t a good option because they, too, have been hit by pollution — Huangshan Mountain in Anhui Province has seen some hazy days.

However, there are still havens that have been spared high levels of air pollution. If you can, pack up and spend an impromptu mini-vacation at one of these places when the air quality takes a dive. Shanghai Daily has several recommendations.

Located in Jiangxi Province, Lushan Mountain was the favorite of ancient Chinese writers and poets because of its picturesque scenery. The forest coverage of the mountain is nearly 80 percent, which helps to cleanse the air in the area, which is home to abundant wildlife.

Waterfalls and fantastic rock formations are some key attractions. The Sandiequan Waterfall is a must-see. The waterfall is 155 meters in height and visually striking.

The Xiufeng Peak area, which includes Shuangjian Peak, Wenshu Peak and Xianglu Peak, are representative of the rock formations in Lushan Mountain. The peaks are in different shapes and wear a mantle of fog and mist — moisture, not pollution — creating another picturesque scene for visitors.

Cangshan Mountain and Erhai Lake in Dali, Yunnan Province, are dreamy destinations for every tourist. Although hiking in Cangshan Mountain requires a lot of energy since the altitude is about 3,500 to 4,000 meters, the landscape in the area is absolutely worth it. Clean, flowing streams and ancient temples mark the area. A 5.5 kilometer, 30-minute cable car ride is another alternative.

Spending several hours on a boat tour of Erhai Lake is relaxing. The blue lake, blue sky and green mountains form a peaceful scene, and there is nothing more delicious than fresh fish from the lake.

It is about a four-hour ride from Dali to Lijiang. If the weather allows, a trip to the Jade Dragon Snow Mountain is a once-in-a-lifetime experience. The mountain, which has a glacier on top, exudes beauty. During sunny days, sunshine paints the mountain peak golden, while the Blue-Moon Valley under the mountain glitters like a sapphire. Halfway up the mountain, the warm Spruce Meadow is an ideal place for a walk.

After your return from the snow mountain area, check out the bars and restaurants in the ancient town. Lijiang is a good place for preserved ribs, tongue, grilled matsutake mushrooms, pea jelly and grilled rice cakes.

As the most developed beach resort in China, Sanya in Hainan Province has become a popular holiday destination. That’s especially so in winter, since the highs remain around 25 degrees Celsius in all seasons. So Sanya is not only a good place to escape from pollution, but also from chilly weather. Activities include diving in Yalong Bay, taking a hot springs bath in Nantian, observing the life in coral reefs in the Sanya Coral Reef National Nature Preserve or just enjoying the sunshine on the beach.

The Yanoda resort has one of the best preserved rain forests in Hainan Province.

Yacheng old town to the west of Sanya, originally built in 1198, has been guarding the south end of China for thousands of years. There are many cultural relics worth a visit.

The mountain area is usually safe from smog since the high altitude keeps pollution away. Huashan Mountain in Shaanxi Province is known for being dangerously steep. The mountain, a holy site to Taoism since ancient times, can be accessed using cable cars, but there also are plank paths built along the face of cliffs, the best for hardy explorers.

The Changkong Plank Road is famed as “The No. 1 dangerous road in Huashan Mountain.” The path, about 100 meters long, is on a cliff at Nanfeng Peak. It is less than half a meter wide, and the only way to steady yourself is the iron chain attached to the side of the cliff. The road originally was built by Taoist priest He Zhizhen in the Yuan Dynasty (1271-1368).

The road is not the only path to the top of the peak, but going to the end of the road is the way to see a mysterious inscription, “Quanzhenyan,” on the cliff. The inscription is carved on the high cliff, and the mystery has not been solved as to who carved the words, or when and how it was done.

Apart from the plank roads, Taoism temples in the mountain are worth visiting. If you stay at a hotel on the mountain, watching the sunrise in the scenic area is recommended.

Qinhuangdao in Hebei Province is a seaside city not as well-known as Sanya, but the beach and the seafood are also enjoyable here. One option is the Beidaihe holiday resort, in the southwest of Qinhuangdao City, which once was the favorite of central government leaders. Every summer, many officials would move their offices to Beidaihe. In 2003, the central government ended the tradition.

shanghaidaily.com
Editorial Message
This site contains materials from other clearly stated media sources for the purpose of discussion stimulation and content enrichment among our members only.
whatsonsanya.com does not necessarily endorse their views or the accuracy of their content. For copyright infringement issues please contact editor@whatsonsanya.com