Updated: 2013-12-06 00:00:00
As time goes by, Hainan is a less and less well-kept secret. China’s only truly tropical region nestled just off its southern coast, the island province has within a decade emerged from relative obscurity to enjoy huge popularity both domestically and internationally. While the southern coastal tourist Mecca Sanya definitely leads the charge, recent years have seen more and more visitors to the island’s other cities and the innumerable unspoilt areas outside of them. During a recent visit to Hainan, my family and I decided to break with tradition and head outside Sanya, keen to experience the almost totally undeveloped western coast of Hainan.

Specifically, we headed to Longmu Bay, a very new destination, but at within an hour’s drive of Sanya Phoenix airport, both easy day-trips to Sanya and hassle-free arrivals and departures are assured. The bay is also just a short ride from several famously wonderful natural parks and scenic areas that were just a touch too far from Sanya to have visited on previous visits to Hainan. A great beach, another essential ingredient of any Hainan holiday, is another thing the bay boasts. Finally, an opportunity to try out the newly opened Wyndham Grand Plaza Royale Hainan Longmu Bay, one of Sanya’s newest and grandest 5* hotels, was another strong enticement. After my stay, I was invited to write down my experiences of the stay for WOS (www.whatsonsanya.com). 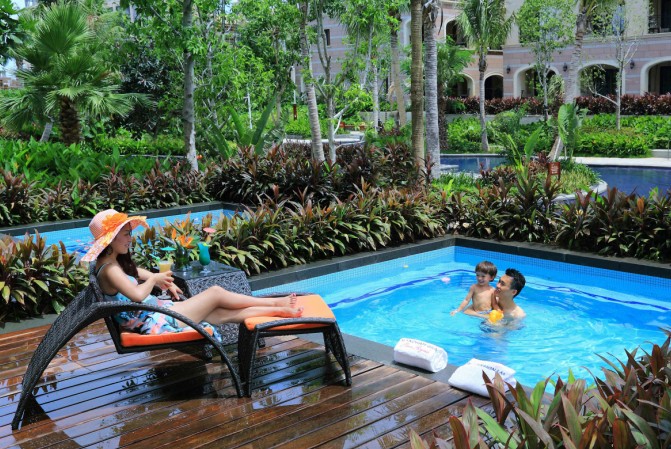 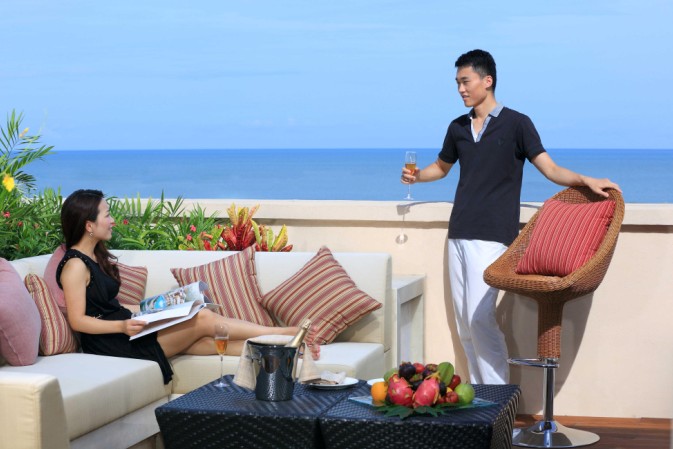 Deluxe family suite in the newly-opened Wyndham Grand Plaza Royale Hainan Longmu Bay.
Unfortunately, with boundlessly energetic children, spending the days lounging about in the suite and rooftop veranda was never going to be an option. Luckily the Wyndham excels when it comes to leisure, holding its own or besting all the hotels in Hainan we’ve stayed previously. Never mind a concierge desk, the hotel has an entire room set aside to help guests plan their travel, trips and activities inside and outside the hotel, complete with a huge map of Hainan on one side and list of suggested trips on the other. Here, the innumerable treasures of Hainan near and far are detailed, and the room was staffed by an attendant eager to advise and help with travel arrangements and bookings. This is especially useful since, unlike in and around Sanya, the area is relatively uncharted. In particular, the Jianfeng Mountain National Forest Park tour organized and lead by the hotel isn’t to be missed. The park is one of Hainan’s six most spectacular tourist attractions and boasts hundreds of square kilometres of China’s most spectacular and diverse rainforest, and unbeatable views from the mountain.

Photos show the view on the top of mountain (L) and the view of villa hotel in the water (R).
Meanwhile, back at the hotel, there are dozens of activities and classes on offer, including water basketball, volleyball and swimming classes in the pool, rentable mountain bikes and tandems to explore, tennis and badminton on the hotel’s own courts. Of course, in reality, most visitors to Longmu Bay are likely to spend the majority of their time at the beach. While the sand at Longmu isn’t quite as pale or fine as that of Yalong Bay, the beach’s idyllic peace and cleanliness, in sharp contrast to the terrible overcrowding of Dadonghai, Yalong Bay and many of the other popular beaches in Hainan, more than made up for it. After all, it doesn’t matter how nice the beach if you can only enjoy a tiny patch of it and are constantly jostling for space. 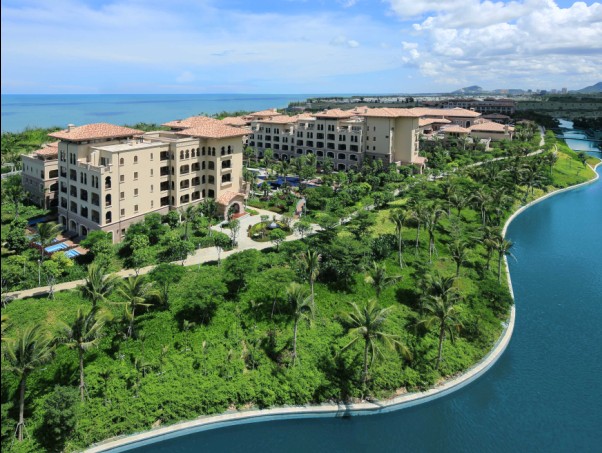 Longmu Bay’s beach is just a three-minute walk from the hotel.

Longmu Bay’s beach stretches as far as the eye can see in either direction from the hotel and the beach is just a three minute walk from the hotel and is almost totally deserted. Bliss. It’s also worth mentioning that the sunsets off Hainan’s west coast are truly spectacular, the most gorgeous on the whole island. The hotel has facilities and equipment for beach football and volleyball and several water sports, in addition to child-friendly activities such as crab hunting and sandcastle competitions. As if that weren’t enough, during our stay at the Wyndham our kids didn’t actually even have to make the tiny journey to the beach to find fun thanks to the hotel’s Little Dolphin kids club. In addition to a large ball-pool, various climbing frames and lots of toys, books and games, Little Dolphin also offers over 20 different activities including various artistic options, treasure hunts and Wii console gaming, all led by friendly and enthusiastic staff. 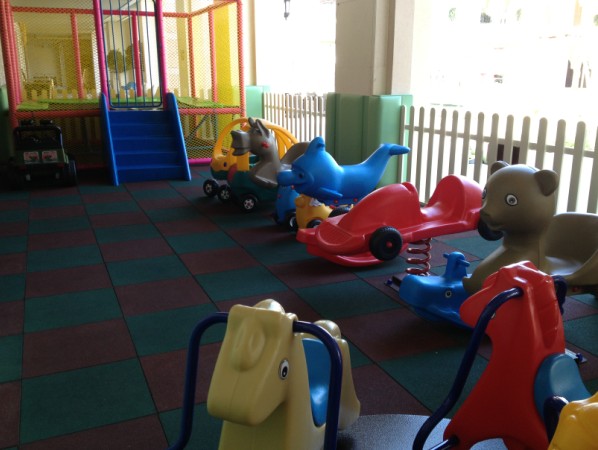 Little Dolphin kids club offers over 20 different activities for children.
All in all, our recent trip to Longmu Bay was a break from a Hainan that is in many ways becoming less and less attractive. Victims of their own success, many of Hainan’s popular tourism areas are losing many of the things that originally attracted us, including most tragically their unspoilt natural beauty and incredible uncrowded beaches. Longmu Bay retains both of these things in abundance, and is neighboured by a vast expanse of untouched rainforest and breathtaking mountains. Befitting such a glorious location, the Wyndham Grand Plaza Royale is a truly exceptional hotel across the board, with excellent leisure, accommodation and food options supported by exceptional service in the Wyndham tradition. There’s little doubt in my mind that both hotel and bay have bright futures, and no doubt where we’ll be staying on future visits to wonderful Hainan Island.
SOURCE: WOS Team by Aidan UK

Next news: More cities and regions in Hainan to release real-time PM2.5 data in 2014