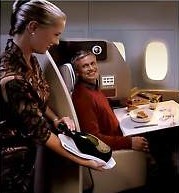 Global Traveler, the only ABC-audited magazine for business and luxury travelers, is releasing the results of its ninth annual Wines on the Wing Airline Wine Competition.

The competition was held May 13 at The Westin New York Grand Central. Twenty-five expert judges participated in the blind tasting of airlines’ white, red and sparkling wines. The judges hailed from a wide range of specialties, including sommeliers, wine shop owners and winemakers. In total, 34 airlines participated, providing 162 samples for tasting.

Airlines are required to submit five different wines — two red wines, two white wines and one sparkling wine/Champagne — to be eligible for the Best Overall International Business Class Wines on the Wing award or the Best Overall International First Class Wines on the Wing. This year, for the second consecutive year, the overall winners were Brussels Airlines and British Airways, respectively.

When it came to red wine, Hainan Airlines reigned supreme in both categories with its Torres Sangre de Toro 2011, Spain.

When it came to red wine, Virgin America was the cream of the crop. The airline’s Fantesca Estate & Winery Cabernet Sauvignon 2003, California, was the finest domestic white on offer.

For the third year, Global Traveler awarded the Best Alliance Wines on the Wing. The participating airlines were divided by their airline alliance. The overall points for each airline were tallied and averaged to determine the alliance with the highest total. Congratulations to SkyTeam.

Global Traveler is the only U.S.-based publication to conduct such a survey in the United States.

The top airlines in each category are:

For more information on the competition, check out the August 2013 issue of Global Traveler or visit www.globaltravelerusa.com .

Global Traveler, the only ABC-audited U.S.-based magazine for the international business traveler, is a business travel and lifestyle publication with an ABC-audited paid circulation of 107,140+. FXExpress Publications, Inc., based in Yardley, Pa., is a privately held company publishing Global Traveler, eFlyer, eFlyer Asia and several annuals; and also operating globaltravelerusa.com, globaltravellerasia.com and blog.globaltravelerusa.com.

SOURCE: eturbonews.com
Editorial Message
This site contains materials from other clearly stated media sources for the purpose of discussion stimulation and content enrichment among our members only.
whatsonsanya.com does not necessarily endorse their views or the accuracy of their content. For copyright infringement issues please contact editor@whatsonsanya.com