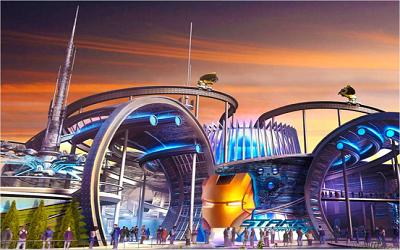 China is building a theme park as a center for space science aimed at youngsters who want to be closer to all things related to space and outer space. However, the science park that was built in Wenchang was later opened to the public. For information, Wenchang satellite launching center of China is currently still under construction since 2007. It is scheduled to complete in 2013 as a rocket launch China-made pillows. Space Park will be standing on the land area of 120 hectares in Wenchang City, Hainan province.

"This project is estimated to cost 3 billion yuan (equivalent to Rp27 trillion),” said garden designer, reported Xinhua. What can be found in this Chinese garden space? Inside are four exhibition sections, namely Earth, Moon, Mars, and Sun.

"Visitors can even get into the rocket launching station and watch the actual rocket launch,” the official said authorities.

This park was built by China Aerospace International Holdings Limited, finance companies listed in Hong Kong, which China Aerospace Science and Technology Corporation as its majority shareholder. Just note, China currently has three stations launch, including the Jiuquan Satellite Launch Center, Taiyuan Satellite Launch Center, and the Xichang Satellite Launch Center. In some ways, China is trying to compete with other developed countries in the world.
SOURCE: homedailynews.com
Editorial Message
This site contains materials from other clearly stated media sources for the purpose of discussion stimulation and content enrichment among our members only.
whatsonsanya.com does not necessarily endorse their views or the accuracy of their content. For copyright infringement issues please contact editor@whatsonsanya.com