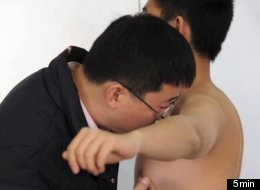 Hainan Airlines in China is looking for pilots with no body odor and makes recruiters sniff the pits of poential employees.
China’s fourth largest airline recently traveled to the Shanxi province to sniff out potential pilots. Literally.

Hainan Airlines stipulated that they would not hire pilots with bad body odor, and the recruiters put their noses up to the jobseekers’ pits to make sure no odor went undetected, SZNews reported on Monday.

It might seem weird to raise a stink about a pilot’s body odor, but one recruiter justifed the sniff test by explaining that airline staff works closely with the public.

"No passenger wants to smell a pilot’s armpits," the recruiter said, according to Oddity Central. "And if they can keep their cool in this test, they aren’t going to sweat in the cockpit.”

The requirement was really the pits for one applicant, who passed every other test with flying colors, only to fail the odor exam.

"I was doomed by my armpits, which are always a bit whiffy," the unidentified recruit said, according to OrangeNews.

Hainan Airlines’ other requirements for prospective pilots include 20/20 vision, a maximum height of 6′ 2", and the ability to communicate in English.

SOURCE: Huffington Post
Editorial Message
This site contains materials from other clearly stated media sources for the purpose of discussion stimulation and content enrichment among our members only. whatsonsanya.com does not necessarily endorse their views or the accuracy of their content. For copyright infringement issues please contact editor@whatsonsanya.com