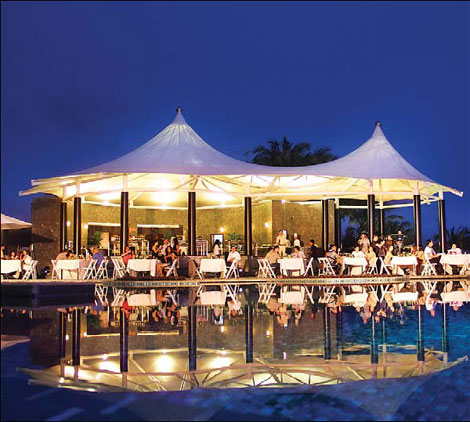 An evening view of the MGM Grand Sanya.

MGM Grand Sanya is a non-gaming hotel and a joint venture of Diaoyutai MGM Hospitality Ltd.

Since its opening in January, the Sanya hospitality market – well represented by a variety of Western four and five star hotels – has benefited from the strong emergence of the new brand, which mixes vibrant Sanya culture with Las Vegas fun.

Vivian Qiao, marketing director of MGM Grand Sanya, says the hotel has a personality and "3e DNA" – energy, excitement and entertainment. She says the hotel connects with its guests on an emotional level, and takes care of their physical needs.

Envied by its rivals, the hotel is the largest in Yalong Bay, with an area of 108,000 square meters. It offers 675 rooms, with rooms ranging from 52 square meters to 350 square meters, including 596 well-appointed rooms, 73 delightful suites and six exclusive beachfront villas – with one, two or three bedrooms. Ocean views are a feature of 438 of the rooms.

Aside from the well-appointed rooms, it was MGM Wet Republic pool party that attracted a lot of attention from filmgoers, focused on Yang Mi, on the verge of losing her beloved husband in the movie. Wet Republic is Sanya’s only pool party and can host up to 400 people.

International artists offer diverse and impressive performances, including a Russian-style pool party on Sept 29. The next day another show will feature a journey back in time to ancient China and a traditional Chinese lantern quiz to coincide with the Moon Festival.

The hotel’s efforts are all based on creating a great destination experience for guests, Qiao says. "This modern new twist on MGM Grand’s five-star experience includes the destination’s picturesque beachside restaurant, the largest spa in Yalong Bay the Sho, and Sanya’s most luxurious entertainment, dining and nightlife options."

Qiao says the nightclub, Papillion, has just undergone a major refurbishment, reopening on Sept 18 to become a rendezvous for all the senses. Inside the stunning surroundings, the dramatic interior lends an air of mystery, while the state-of-the art visuals are synced up with the pulsating European-style club music to create a sexy, otherworldly atmosphere.

World famous DJs have performed here, while the house DJ Edmund is a major figure in China’s dance music scene.

In addition to the impressive entertainment offered, the hotel also has an elegant and graceful facet.

For instance, women and children are fascinated by the chocolate fountain, which runs 24 hours every day. The hotel’s chocolate chef once worked alongside and studied with Joel Robuchon, the world’s most awarded Michelin-starred chef, with 27 Michelin stars.

By the end of September, a top chef working at China’s Diaoyutai State Guest House for more than 30 years will take over the kitchen for three months, offering State leader-level cuisine.

Previous news: Cloud Computing in Financial Institutions 2013 to be held in Sanya