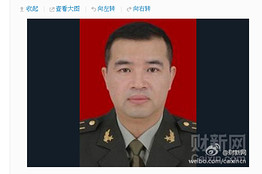 A screenshot shows a photo of Fang Daguo, political commissar for the Yuexiu District Armed Forces Department in the city of Guangzhou, that circulated widely on Sina Corp.’s Weibo microblogging service after Mr. Fang was accused of threatening and assaulting a flight attendant in a dispute over carry-on luggage.

Even close ties to the military can’t shield boorish Chinese officials from being called out for behaving badly in the age of social media.

China’s state-run Xinhua news agency on Saturday issued a report largely confirming the account, originally published on Sina Corp.’s Weibo microblogging service, of a China Southern Airlines flight attendant who said she was bullied by a Chinese official and his wife in a conflict over carry-on luggage during a flight on Aug. 29.

The official is identified in the Xinhua report as Fang Daguo, a member of the Communist Party Standing Committee in the Yuexiu district of the southern metropolis of Guangzhou. Mr. Fang is also political commissar for the Yuexiu Armed Forces Department.

Internet users had earlier helped identify Mr. Fang after the flight attendant, whose own identity remains unclear, posted an account of the attack on the microblogging service that quickly went viral.

The conflict occurred on a China Southern flight from the eastern city of Hefei to Guangzhou. According to accounts from the flight attendant, a co-worker and passengers interviewed by Xinhua, it began when Mr. Fang and his wife, the latter smelling strongly of alcohol, called the flight attendant after failing to find space above their seats to store their carry-on bags.

When the flight attendant suggested the couple store their bags elsewhere, Mr. Fang grew suddenly angry and grabbed the flight attendants’ arm. “If it weren’t for us, you wouldn’ t even have food to eat,” his wife yelled, according one passenger account cited by Xinhua.

That post was accompanied by a series of photos showing a torn flight attendant’s uniform and a woman’s scratched and bruised arm.

Mr. Fang apologized to the flight attendant “of his own volition,” Xinhua quoted the department as saying.

Attempts to reach Mr. Fang through the Yuexiu district government on Sunday were unsuccessful. The flight attendant has not updated her Sina Weibo feed since Friday.

Prior to the release of the preliminary investigation results and the Xinhua report, the incident had produced a torrent of angry responses online, including one posted on the verified Weibo account of Xinhua’s own bureau in Guangzhou on Friday.

"According to the usual practice, there are no official reports about the political commissar assault incident,” read the post, which was later taken down. “Even more ridiculous, media microblog accounts have also been forced to stay silent on this. A reminder: This sort of protection doesn’t just harm individuals, it also harms the entire organization. Because one is secure in the knowledge that he has backing, so he acts brazenly and without scruples.”

Xinhua’s Guangzhou bureau declined to comment on the intent of the post or why it was later deleted.

While other members of China’s ruling class have been exposed and eviscerated in public for much worse offenses , this is a rare instance in which someone with connections to China’s powerful military has had his misdeeds mentioned in the state-run press following a social media outcry.

"Innumerable incidents prove that under the gaze of Internet users, no truth stays hidden forever,” Xinhua wrote on its official Sina Weibo feed on Saturday shortly after publishing its report on the incident.

Not everyone was ready to declare victory, however.

"An apology and it’s all over?” wrote one dissatisfied Sina Weibo user. “At the very least, he should be dismissed. Or are military people exempt?”

Another argued that the online outcry over the flight attendant’s story, far from signaling progress, was instead cause for concern. “It’s precisely this kind of case that proves how far China is from enjoying rule of law,” the post read. “How many people are there in this country who, because their misfortunes don’t attract the attention of Internet users, are forced to remain victims of power abuse?”

Previous news: The woes of fishermen in Tanmen village, Hainan