NYC-bound Air China flights back to Beijing after ‘threatening message’ 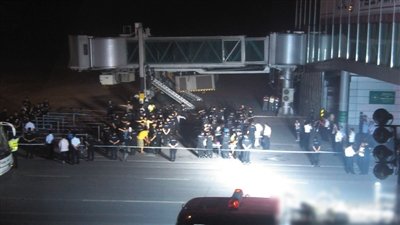 The Boeing 747 – flight CA981- landed at Beijing Capital International Airport at around 8:30pm about eight hours after it had set off for John F. Kennedy Airport.

"The flight returned to Beijing for the sake of passenger safety as it received a threatening message," the carrier said on its Weibo microblog shortly after the landing, without giving any further details.

Everyone was asked to get off the plane and airport police carried out security checks on the taxiway, according to passengers.

The airport later announced that "nothing abnormal has been found after the overall inspections."

Photographs posted online showed dozens of uniformed police on the taxiway while passengers lining up for inspection.

The Boeing 747 flight took off again at just after midnight to take the passengers to their destination, the airlines said on its website.

"We had little idea that the plane was flying back until it landed at the Beijing airport again," said Wang Qiang, a passenger onboard who was going to New York to take part in an international conference.

Wang said he suspected the plane might be flying back because of the route information on the screen in front of him but a flight attendant told him there was "something wrong with the screen."

Shortly before landing, there was an announcement that the plane was encountering some turbulence and attendants asked passengers to close all the window shades.

"But when we opened the sunshades again, we saw the ground of Beijing," another passenger said.

The pilot told passengers the plane had received a threatening message and all passengers needed to go through inspections.

"I have never seen so many police officers waiting at the runway," the passenger said.

All the passengers kept calm and had cooperated with the police carrying out the security checks, the airport authority said.