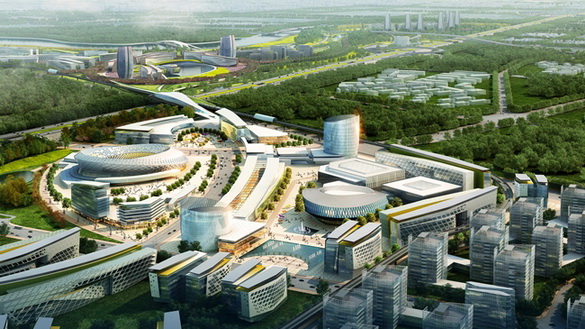 China Southern Airlines, the largest carrier in Asia, plans to build not just a new corporate campus, but an entire small city as its headquarters on the outskirts of Guangzhou. Named China Southern Airport City, the project is scheduled to begin rising on a 988-acre site about four miles from Guangzhou’s Baiyun International Airport as early as the end of this year. The international architecture practice Woods Bagot is designing the master plan, after winning a competition that included Paul Andreu and Zaha Hadid.

The site comprises two wing-shaped parcels of land, which are separated by a highway leading to the airport. Because the project sits directly beneath a runway approach, the company wants to make it as attractive from the air as on the ground. “It’s the gateway,” says Jean Weng, a Woods Bagot principal based in Beijing. “This is the first thing you’ll see when you’re landing in the city.” As a result, the architects are attempting to give the arrangement of buildings and landscape a sense of “aerial flow,” she says. Guangzhou’s local flower, the kapok blossom, which China Southern uses in its logo, was also a point of inspiration for the plan.

On the ground, the Woods Bagot plan connects the two parcels of land with a bridge and light rail system that extends over the highway, but gives each area a set of distinct functions. “We put most of the airline’s internal functions, like a training center, staff dormitories, and data center facilities on the east parcel,” along with plenty of outdoor space, designed in collaboration with Hargreaves Associates and Sherwood Design Engineers, says Weng. “Most Chinese cities are very dense and very urban, but China Southern wants to create a human-scale campus, that’s close to nature.”

On the western parcel, the section closest to the bridge will include public functions, such as a media center, business hotel, outlet mall, and performing arts center. Manufacturing, operations, and research buildings will be clustered further north. Although Weng estimates it may take 10 years for China Southern to complete the project, the result is intended to be “a mini-city of their own, sustainable for long-term growth.”