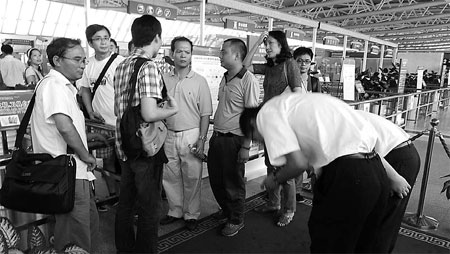 Two airport employees bow to passengers who refused to board a delayed flight on Tuesday at the Sanya Phoenix International Airport in Hainan province.

Two more disputes between airlines and passengers over delayed flights have occurred in the past couple days, prompting experts to call for the industry authority to draft unified rules to prevent further problems.

On Wednesday, a flight from Chongqing to Beijing took off around five hours later than scheduled, leaving behind 91 passengers who were still arguing for more compensation, according to the Chongqing Morning Post.

The flight, sold as a China Eastern flight but carried out by China United Airlines, was scheduled to leave Chongqing at 7:55 pm on Tuesday, but the plane was not available until midnight. No explanation was given for the delay.

Passengers were offered 100 yuan ($16) each as compensation, but some demanded China Eastern send a senior managerial staff to negotiate the amount with them.

An employee with the Chongqing Jiangbei International Airport said there was no one who could negotiate with them because China United Airlines did not have any representatives at the airport.

The passengers who stayed behind rescheduled their flights and left without any compensation.

An employee at the China United Airlines’ publicity department confirmed the incident, but declined to comment on Thursday.

In a separate case, some passengers demanded two airport staff to bow to them, as a condition for them to board a delayed flight in Sanya, Hainan province, the local Southland Metropolis Daily reported on Thursday.

The flight from Sanya to Shenzhen, carried by an unnamed airline, was scheduled to leave at 9 pm on Monday. But the plane arrived four hours late at 1 am on Tuesday. Passengers were told that the delay was caused by rain in Shenzhen and traffic control, and they would receive 500 yuan each as compensation.

Thirty-three passengers boarded the plane, but around 70 stayed behind and demanded 800 yuan in compensation. Their protests caused the flight to be delayed an additional 11 hours.

The passengers finally agreed to the 500 yuan in compensation but demanded that two airport employees bow to them to ease their anger.

The two incidents are the latest in a string of reports about passengers taking extreme measures against airlines after long delays.

Earlier this month, around 30 passengers whose flights had been delayed blocked several gates to prevent other travelers from boarding flights at the Kunming Changshui International Airport.

In April, some passengers went onto the tarmac at Shanghai Pudong International Airport and were given 1,000 yuan each as compensation – a record amount.

Zhang Qihuai, a lawyer specialized in civil aviation disputes, said disputes are becoming more common because "there are no unified rules for both sides to follow after flights are delayed".

"Some passengers do not know that. Some even thought arranging a flight is as simple as arranging a long-haul bus to transport passengers, without considering factors such as safety concerns," he said.

"It is time for the Civil Aviation Administration of China to draft an industry rule that both airlines and passengers can follow to protect their rights legally," he said.

Wang Jiangmin, who works in China Southern Airlines’ marketing department, said passengers could file a lawsuit or a complaint instead of taking extreme actions.

The 91 passengers who were left behind in Chongqing have not received full support from netizens, industry observers said.

"At a time when flight delays have become common, getting compensation is already a success for passengers. If you continue to strive for rights blindly, it will hurt others’ rights," a netizen wrote on Sina Weibo, a popular micro-blogging service in China.

Zhang said airlines should also make efforts to improve their services to reduce delays and mitigate the disputes.

Industry insiders said a plane usually has six to eight domestic flights each day, and the schedule is so tight that if one trip is disrupted, the other flights will be delayed.

Zhang said some airlines use flight safety as an excuse to exempt themselves from paying passengers compensation, "which is not right, no matter how special the air transport industry is".

The CAAC publicity department declined to comment on the recent incidents on Thursday.

Next news: Core area of Wanning Outlets Shopping Center to be completed in Aug