HomeTravelTravel NewsTangla, China’s luxury hotel strives to be on par with Western brands

Tangla, China’s luxury hotel strives to be on par with Western brands 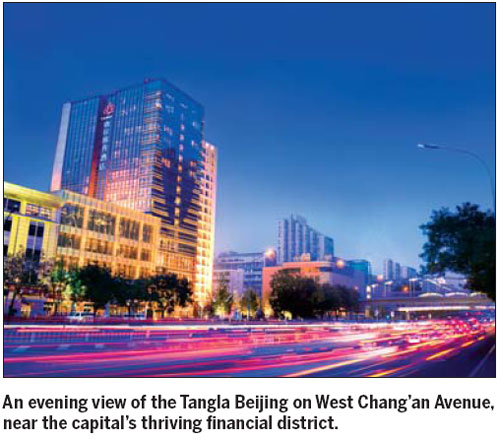 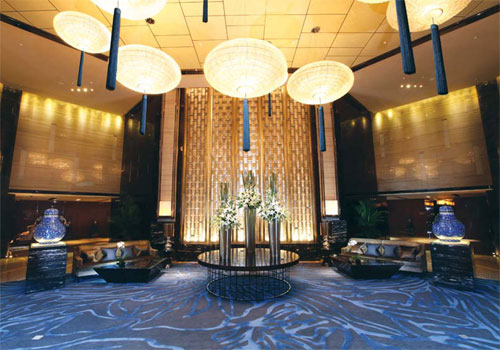 With superior service and facilities, the Tangla Tianjin is a Six-Star Diamond Award winner.

Typically lacking their foreign counterpart’s hospitality acumen, most Chinese hotels have competed for the market’s middle and lower tiers, and few have ventured overseas.

But not everything made in China is created equally.

Founded in 2009 and named after a snowcapped mountain range on the Qinghai-Tibet Plateau, Tangla draws inspiration from several millennia of cultural traditions as it seeks to put China on the map as the origin of a high-end hotel brand.

With China’s ascent on the global stage, Chinese worldwide are revalidating their cultural heritage, says Steven Song, chairman and president of HNA Hotels and Resorts. In the hospitality industry, he says, the world’s second-largest economy has a major opportunity to draw upon its traditions to better serve the global community.

Song, a graduate of the Hong Kong Polytechnic University Graduate School of Hotel and Tourism Management and a 15-year veteran of the China hospitality industry, speaks with great enthusiasm about his mission.

"Eastern hospitality has much to offer travelers," he says. "It is time that we built a brand that personifies its charm, grace and dedication to service. Tangla strives to be on par with Western brands and international standards."

He adds: "We do aim to make Tangla into China’s pride on the world stage, but a homegrown luxury hospitality brand will also give travelers greater choice – and more competition benefits the overall industry."

Service at the Tangla has a stronger human touch than at most hotels, with special attention given to the personal feelings of guests, Song says.

Underpinning that dedication to service lies the concept of li, which in Confucian philosophy refers to proper conduct or ritualized roles and responsibilities. Li corresponds in many respects to Western ideas of good manners.

In the Analects, a principal Confucian text, Confucius emphasizes that to uphold li, in all circumstances one should be highly fastidious and act in a manner most suitable to the situation. 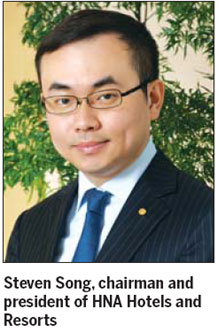 With that in mind, the Tangla hotel developed a new operating model with service at the core for its 116-room Tianjin hotel.

The hotel is not divided along typical departmental lines. There is no food and beverage department nor a front office. Instead, the hotel is divided into "ambassador service units" with one "ambassador" per unit.

"When guests need something, there is no need to deal with the front desk. They just contact their ambassador," Song says.

Tangla is the first Chinese hotel brand on the mainland to receive the award and one of five global recipients, including the Mandarin Oriental Tokyo and the Peninsula Hong Kong.

With its star rising in more ways than one, Tangla has expansion plans underway, with new Guangdong and Sanya hotels slated to open by the end of the year.

To meet rising demand, Tangla’s parent company HNA plans to open additional resorts in Hainan over the next few years.

Responding to an inquiry about oversupply in the Hainan tourism market, Song remains bullish.

"Authorities at the national level support the development of Hainan into a world-class tourism destination," he says. "Duty-free shopping is proving a big hit with domestic travelers and giving them another reason to visit besides relaxing on the beach."

Internationally, Tangla will launch hotels in the United States and Europe over the next 18 months.

Its first foray into the US market will be a boutique property in New York City. The Cassa Hotel, acquired by HNA in February, will relaunch under the Tangla brand at the end of the year.

Additionally, a Tangla hotel will open in the embassy district of Brussels at the end of 2013.

Technology buffs will cheer the Tangla’s decision to equip guestrooms in all of its hotels with iPads by the end of next year.

Guests will be able to use the iPads to check in and out.

The Tianjin hotel, perhaps as recognition of its six-star achievement, will be the first to offer the tablets for guest use.

Next news: Haikou to spend RMB4.7 billion on renovation of Qilou Old Street