The Ministry of Railways has found quality defects on 12 rail lines that may endanger railroad safety, according to a document recently obtained by the media. 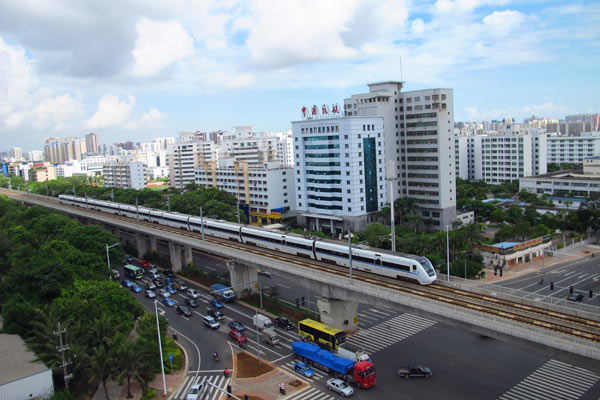 A bullet train runs on the Donghuan high-speed railway, which links Haikou, capital of the island province of Hainan, and Sanya, a tropical resort in the province. The rail line has been exposed as having some problems with the quality of its infrastructure.

Seven of the 12 lines have been put into service, including high-speed passenger railways between Wuhan and Guangzhou and between Zhengzhou and Xi’an, according to the document.

Other problems were found on five lines currently under construction, including one linking Lhasa and Xigaze in the Tibet autonomous region, which is an extension of the Qinghai-Tibet railway.

The ministry severely criticized some contractors for building with low-quality materials and not using enough iron bars in reinforced concrete.

Cracks on the railway tunnel’s arch could cause concrete chunks to break off when a high-speed train passes, destroying the train’s power supply equipment, they said.

A ministry official who spoke to China Daily on the condition of anonymity confirmed the authenticity of the document, saying it was meant to be circulated inside the ministry and to relevant parties.

He said the ministry is paying great attention to quality issues, and has organized regular inspections on railway construction and operations.

"It is just another regular checkup to guarantee railway safety," he said.

According to the document, the ministry has already taken measures to punish those responsible for the quality defects.

It suspended several construction and construction supervision companies from tendering and bidding on railway projects for a month, and required them to rectify the problems as soon as possible.

Wang Mengshu, an expert on railway tunnel construction at the Chinese Academy of Engineering, said he has not seen the document, but knew that holes had been found in the arches of railway tunnels on the Wuhan-Guangzhou passenger line and the Zhengzhou-Xi’an line.

A cavity in the tunnel arch could cause it to collapse.

"These problems will not affect the operation of the entire line but need to be fixed," he said.

"People around me are expressing worries over taking high-speed trains after reading the news," said Sun Pengwei, a resident of Fuzhou, Fujian province, who travels twice a month on the Fuzhou-Xiamen high-speed line — one of the defective railways.

"Although no accidents have occurred on the line, I hope authorities can make sure that there are no hidden risks."

The public has the right to know any safety threats in the railway system, and authorities should make such information more transparent, he said.