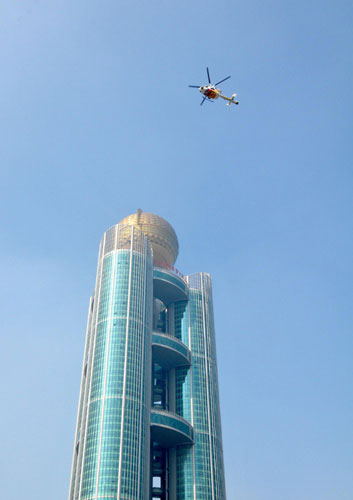 Huaxi, the richest village in China, said the company has formed an operational team of chief pilots and other professionals, said Wu Xie’en, chairman of Jiangsu Huaxi Group Corporation.

Huaxi’s two helicopters — one manufactured by McDonnell Douglas and the other by Eurocopter — cost almost 90 million yuan (14.12 million U.S. dollars).

With the two helicopters, the village-run aviation company will mainly offer air travel services for villagers and tourists. Those traveling with the company will need to present identification to make an air travel appointment.

Based on its general aviation airport as the landing point, the helicopters can carry four to six passengers each to catch a bird’s eye view of the village and the nearby city of Jiangyin. The flight altitude will remain under 300 meters.

In the 2011-2015 period, Jiangsu Huaxi General Aviation Co., Ltd. will expand its fleet to include five helicopters and one business jet to actively engage in other aviation businesses such as emergency rescue, Wu said.

Moreover, the company is planning to explore more air routes to tourist attractions in Guangzhou, Qingdao and Xiamen, he added.

According to a circular jointly issued by the State Council and the Central Military Commission, China will open part of its low-altitude airspace in an orderly manner to promote the country’s general aviation sector.

The village, covering an area of 0.96 square kilometer, has a population of about 1,500.

With steel, textile and tourism as pillar industries, Huaxi was the first Chinese village to generate 10 billion yuan in local gross domestic product in 2003.

The village’s current annual per capita income is over 10,000 U.S dollars, and each household has a villa and private cars.

It has become the "backyard" of neighboring cities, as Huaxi sees over 2 million tourist arrivals for leisure and vacation every year.