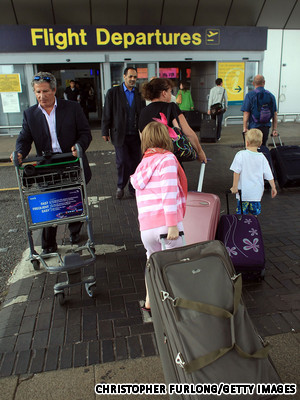 Rome alone: the 11-year-old was able to evade security by mingling with other families
A young boy has managed to board a plane in Manchester, England and fly to Rome with no identification or boarding card, or even any guardians to accompany him.

Liam Corcoran slipped through security at Manchester Airport yesterday, July 24, having escaped from a shopping trip with his mother, and was only discovered after co-passengers on the Jet2 flight became suspicious of the “Rome-alone” traveler.

A spokesman for Manchester Airport denied there was a security problem. “This isn’t a loophole in airport security. There was no threat to the airport or the aircraft or passengers.”

However he admitted serious errors had occurred and staff members have been suspended as a result.

"He went straight from security … to the nearest aircraft that’s boarding, which happens to be this Jet2 flight to Rome.

At a time when British airport security is on heightened alert with the Olympics about to begin, this should be a serious concern for the authorities.

It’s not the first time a minor has been able to board a plane with no documentation.

In 1985 13-year-old Noel Murray and 10-year-old Keith Byrne slipped through security to board an Air India flight from London Heathrow to New York without passports or tickets.

They were later returned home to Dublin.

SOURCE: cnngo.com
Editorial Message
This site contains materials from other clearly stated media sources for the purpose of discussion stimulation and content enrichment among our members only.
whatsonsanya.com does not necessarily endorse their views or the accuracy of their content. For copyright infringement issues please contact editor@whatsonsanya.com

Next news: Largest high-end business complex to be built in Danzhou, Western Hainan