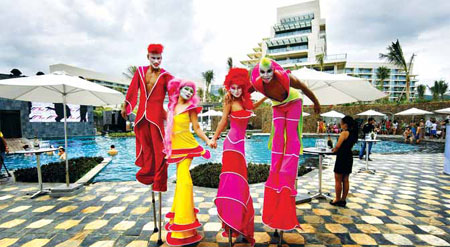 But nine years later, some 2,000 hotels valued at trillions of yuan remain under SOE ownership.

Zhang Xuewu, president of China National Travel Services Group, said his company hoped to benefit from the sell-off by other SOEs and planned to acquire 20 to 30 hotels by the end of 2010.

The number actually turned out to be just one – the Chongqing Liyuan Hotel – and even that sale would take until the end of 2011.

The reluctance by SOEs to divest hotels is in part due to keeping their convention and meeting revenues in-house, said the general manager of a hotel owned by China Life Insurance Co.

SOEs set up hotels for their own conferences and to accommodate clients and senior officials. "So it is like moving our money from the left pocket into the right," he said.

Some SOEs own the property managed by internationally known hotel brands, which have many times brought faster returns than their core businesses.

One example is China National Cereals, Oils and Foodstuffs Corp – widely known as COFCO – which owns the property for some of the St. Regis Hotels in China.

Another barrier to the divestiture is inefficient operations at many SOE-run hotels, which makes potential buyers wary.

A study by a SASAC research center has proposed a 1 billion yuan ($154 million) fund collected from SOEs that would help smooth the way for restructuring of five to 10 hotels, which would be strengthened to be internationally competitive within three years, according to the Chinese-language newspaper Economic Observer.

Zhao Huanyan, an analyst with Hotelsolution Consulting said: "State-owned tourism and hotel companies such as Overseas Chinese Town and China Travel Service may benefit the most from the changes".

Industry insiders noted that chances of implementing the recommendation are almost "zero" as it would be difficult to push SOE’s donations to the fund.

Another hurdle to any change in SOE ownership is the promising outlook for the hotel industry.

Marriot International Inc opened its 100th hotel in China last year, while Hilton plans to increase its number from 30 to 100 by 2014.

InterContinental Hotels Group, the largest hotel company by room numbers, has nearly 170 hotels in China including the Crowne Plaza and the Holiday Inn brands, and plans to expand that to 300 in five years.

Diaoyutai MGM Hospitality, a joint venture between US-based MGM Hospitality and China’s Diaoyutai State Guesthouse, is expected to boost the presence of ultra-luxury brands: Diaoyutai, Skylofts, and Bellagio by MGM.

Figures from the National Bureau of Statistics in China and the United Nations World Tourism Organization say that China will move alongside the US to become one of the two largest hotel markets in the world by 2025, when China is expected to have 6.1 million hotel rooms, the same number as the US.

Zhao said that some foreign hotels have even introduced medium-level brands and promoted them as premium in China.

chinadaily.com.cn
Editorial Message
This site contains materials from other clearly stated media sources for the purpose of discussion stimulation and content enrichment among our members only.
whatsonsanya.com does not necessarily endorse their views or the accuracy of their content. For copyright infringement issues please contact editor@whatsonsanya.com

Next news: Hainan’s 1st private plane 4S shop to be built in Wenchang within 5 yrs