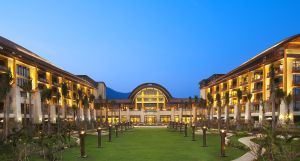 "We are thrilled that The St. Regis Sanya Yalong Bay Resort has already been honored with several sought-after awards and acknowledgements less than six months after opening,” said general manager Sunny Heng. "It is incredibly rewarding to be recognized for our efforts in creating an exclusive tropical sanctuary with an unrivaled combination of amenities and service, including our signature St. Regis butler service.”

The St. Regis Sanya Yalong Bay Resort appeals to yacht owners by offering the island’s only sail-in, sail-out access through an exclusive partnership with the Sanya Yalong Bay Yacht Club (SYYC), located on property. Guests arriving by yacht are afforded private butler service upon arrival and the duration of their stay, as well as access to private limousine and jet services as needed. In addition, guests at The St. Regis Sanya Yalong Bay Resort will enjoy the opportunity to charter fully-staffed Yacht Club vessels for private parties, sunset cruises, fishing excursions, corporate events and overnight cruises.

The St. Regis Sanya Yalong Bay Resort was also named the Best New Resort in China in the 5th Annual TTG China Travel Awards 2012, which are determined by all travel consultants, tour operators, and destination management readers of TTG China, TTG-BTmice China, TTG Asia, TTG India, and TTGmice. The TTG China Travel Awards are considered some of the most coveted and influential awards in the region’s industry.

Located on one of the most coveted and beautiful stretches of coastline on Yalong Bay, The St. Regis Sanya Yalong Bay Resort offers 373 exquisitely designed guest rooms and suites, and 28 oversized and sumptuously appointed beachside villas. The resort’s contemporary architecture is inspired by the concept of two intertwined dragons, reflected as undulating waves which are incorporated in all of the resort’s structural elements. The St. Regis offers three signature epicurean experiences and a sophisticated lounge which are certain to become island destinations of their own. In addition, The St. Regis Sanya Yalong Bay Resort is introducing the South China region’s first Iridium Spa, a lavish five-star sanctuary of wellbeing.