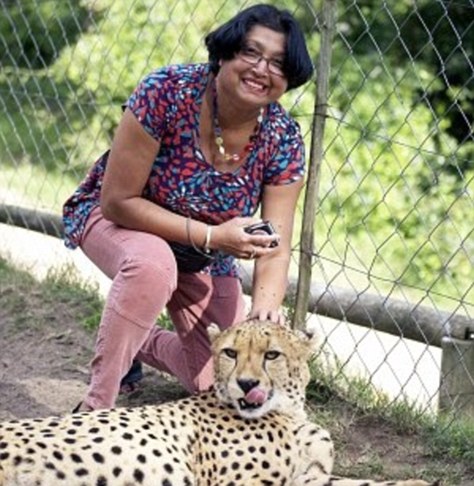 Calm before storm: Violet D’Mello seconds before she is attacked by cheetah

Terror: Violet is helpless as cheetahs tear at her head and body 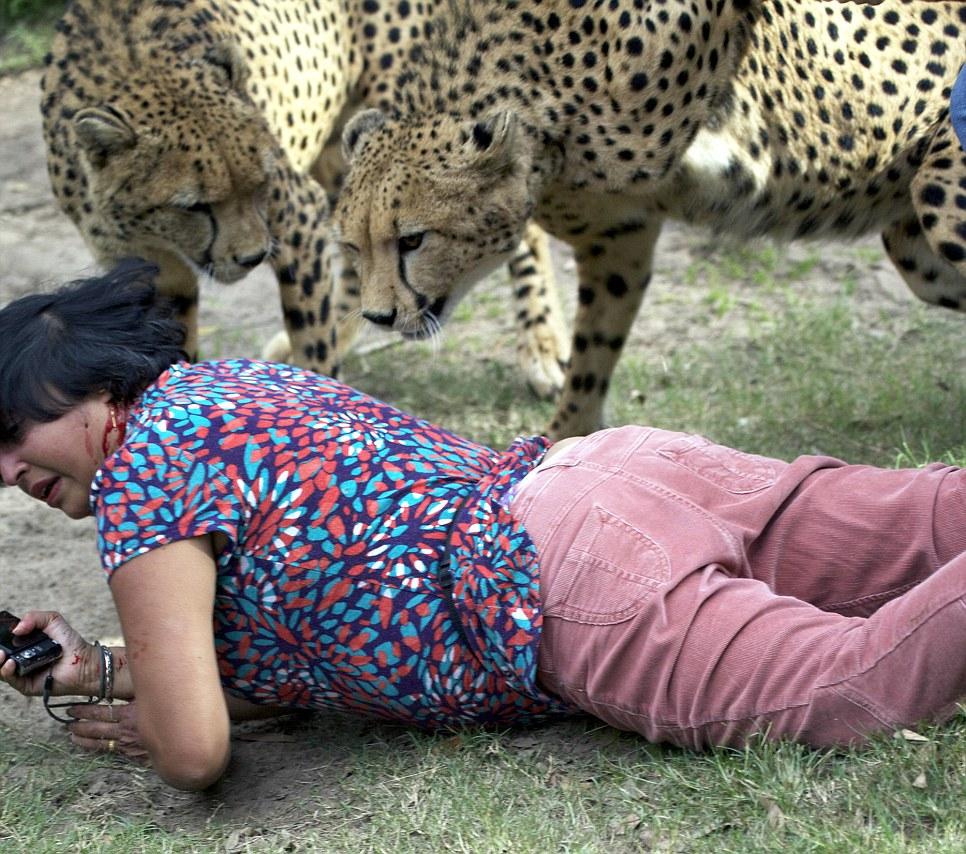 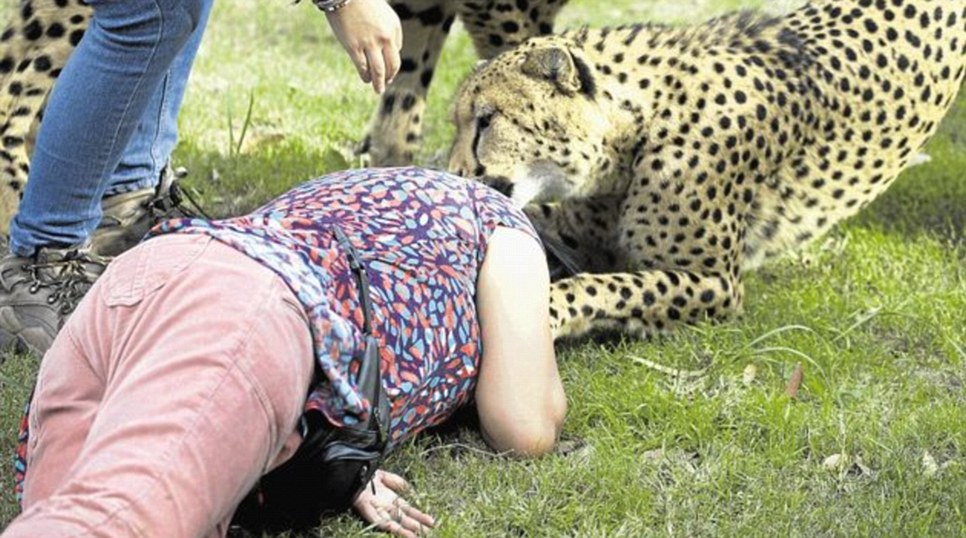 Ordeal: The attack lasted around three minutes and her husband captured these shots 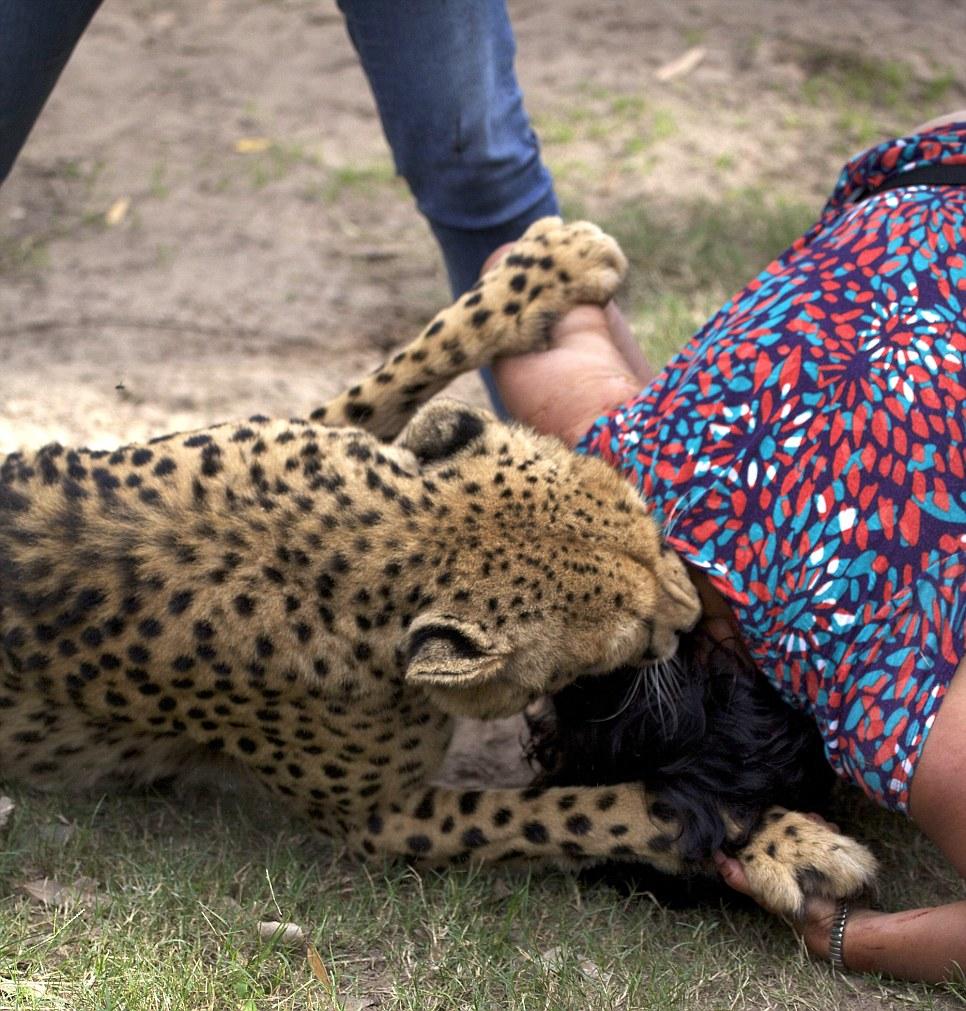 Vice-like grip: Violet is pinned to the ground by cheetah’s jaws

Forced to the ground and with blood pouring from her head, this British holidaymaker had a miraculous escape after being attacked by supposedly tame cheetahs.

Violet D’Mello was visiting a wildlife park with her husband Archie during a trip to South Africa for her 60th birthday.

But their day out went horrifically wrong when two cheetahs turned on her, knocking her to the ground and biting her legs and head in a horrifying attack.

Other tourists tried to scare the beasts off as park attendants desperately fought to get them away from the injured woman.

And her husband? He carried on taking photographs, saying he did not quite realise what was happening.

The attack took place at a wildlife park where tourists can pay £4.50 to pet cheetah brothers Mark and Monty, both hand-reared and said to be tame.

Inside the private Kragga Kamma game reserve near Port Elizabeth, Mrs D’Mello posed for a picture with a cheetah, stroking its head and describing it as ‘a beautiful animal that felt so soft’.

However, things changed quickly when one of the beasts grabbed eight-year-old Camryn Malan, who was among other tourists in the enclosure, and began biting her leg.

Mrs D’Mello comforted the girl’s seven-year-old brother, Calum, telling him not to run so he would not aggravate the animals – but as she did so, the cheetahs turned on her.

The mother of two said: ‘I never imagined it would attack me because I was an adult. But the next thing I knew I was on the floor and the cheetah was right on top of me.

‘It started scratching me really badly and then I could feel the other one come up too and one of them got my neck in its mouth.

‘I was just screaming and trying to get my hands up around my neck to protect myself, but I was being bitten all over my legs and down my side near my kidneys.

‘People all around were screaming, and I had no idea how I would escape. Something inside me just said, “Don’t move. Don’t move at all. Don’t react, just play dead”.

‘Eventually someone came and chased them off me and my husband picked me up off the floor.’

The housewife, from Aberdeen, was bleeding heavily from cuts to her legs, head and stomach, and needed stitches in hospital.

She said: ‘The doctor at the hospital said cheetahs usually aim for the stomach area and disembowel their victims, so I was lucky to be alive.’

Mr D’Mello, 64, a helicopter pilot who booked the month-long trip as a birthday gift for his wife, said he kept taking photos until he realised the cheetahs were biting her.

He added: ‘I couldn’t do anything and the guide didn’t even have a stick to defend herself. In the end a woman from reception came running over with a stick which the guide used to frighten away the cheetahs. The attack must have been going on for three minutes at least by then.’

He said: ‘We arrived the game reserve and there was an enclosure with two cheetahs inside. There was a sign up saying that you could take a tour of the enclosure with a guide and stroke the cats.

‘We decided to go for it as it all seemed safe, and at first the cheetahs were calm. We were in there with a local family who had young children.

‘The guide was a young woman, who said we could go over and stroke the cheetahs.But as my wife went over to do so the animals got up and walked away.

‘The guide said that at this time of the day they were a bit agitated.We walked away and as we did so one of the cheetahs leaped on a little girl who was in there.

‘She screamed loudly and we turned to round to see what was happening. She fell on her stomach and the animal bit her thigh.’

The couple were forced to put their plans on hold for several days following Saturday’s incident but have continued their holiday in another game park near Port Elizabeth.

Shaken Mrs D’Mello was rushed to hospital for treatment after the incident.

She needed bandages for wounds on her head, stomach and legs and was given doses of painkillers and antibiotics.

Mr D’Mello, who booked the couple’s month-long tour of South Africa as a 60th birthday present for his wife, said she was bleeding profusely after the attack.

He said: ‘She was in a terrible state and was bleeding badly, particularly from the wound on her head.

‘Luckily one of the women who worked at the place was a former nurse and she helped patch her up before we went to hospital.

‘The doctors said she was lucky to have escaped alive.

‘One of the cheetahs’ paws had torn around her right eye and if it had been a centimetre to one side she could have lost her eye.’

‘We’re very angry about what happened because we were told the situation was safe and it obviously wasn’t.

‘The park said they didn’t know what had caused the cheetahs to attack but they shouldn’t let tourists in unless they’re sure it is safe.’

The South African family caught up in the incident told a local newspaper they were also shaken by the attack. Glenda and Samuel Malan visited the park on Saturday with their children Cassidy, 11, Camryn, 8, and Calum, 7.

Mr Malan told the Port Elizabeth Herald newspaper she heard screams as Camryn was mauled. He said: ‘It was hectic. I couldn’t do anything because I was outside. I was just screaming.

‘I heard my children screaming. By the time I arrived there, she had already been bitten. It was a traumatic experience.’

Kragga Kamma park manager Mike Cantor told the Herald it was unclear what sparked the attack. He said the captive cheetahs, brothers Mark and Monty, had been hand-reared since birth and were considered extremely tame.

He said: ‘It’s not something we’ve ever really experienced. It’s obviously very unfortunate, and we’re looking into what may have startled or riled up the cheetahs.’ He added: ‘We’ve had these animals for four years.

‘Dozens of people have come through here and seen them and fallen in love with them, so it pains us to hear about something like this. From what we’ve been told, there was a lot of commotion at the scene, which, unfortunately, most likely aggravated them somewhat.

‘We’re also considering the possibility that a female in heat in one of the neighbouring enclosures might have played a role here, but we can’t be sure at this stage.’

The petting facility at the park had been closed pending an investigation into the incident.

Guests can stay on tents or cabins on the park and take walking or driven game drives through its lush forest and grassland.

The Kragga Krama game park is a private reserve which offers visitors the chance to see wildlife close up. The family-run site lies close to Port Elizabeth in South Africa’s Eastern Cape province, around 460 miles east of Cape Town.

It is home to several animal species including cheetah, giraffe, zebra and buffalo. The D’Mellos, who have two grown up children, are in South Africa for a month-long self-drive tour.

Park manager Mike Cantor said: ‘We’re looking into what may have startled or riled up the cheetahs.’

Mr Cantor explained that he had raised the two four-year-old cheetahs, brothers named Mark and Monty, since they were born.

He said: ‘I have grown up with these cheetahs and they are not aggressive animals. It is almost like they wanted to play with the woman.What happened was that a young girl got a bit uptight and then ran away and the cheetah grabbed her by the leg.

‘The trouble is that cheetahs, like dogs, don’t have retractable claws and so they would have injured as they did so. The other lady [Mrs D’Mello] went in to assist and the cheetahs probably thought it was a play time.

‘It was a very busy at the park that day, which may have aggravated them somewhat.’

They arrived in Cape Town on April 17 and spent six days in the city before driving east along the country’s Garden Route coastline.

A cheetah expert said humans needed to be careful around big cats.

Professor Graham Kerley, head of zoology at the Centre for African Conservation Ecology, told the Herald that even captive animals were dangerous.

He said: ‘Keep in mind that in the last 10 to 12 years, three people have been killed by captive lions. We mustn’t pretend these are tame pussycats here.

‘They are wild and should be considered dangerous.’

Kragger manager Dave Cantor has dismissed the attack as a ‘freak incident’.

He said: ‘They are pretty playful but they love human contact and we have never had an problem with them before. They usually purr like crazy when people stroke them.

‘This time I think it was really just a freak incident. It was a long weekend and there were lots of children around the outside of the enclosure so perhaps the cheetahs got riled up.

‘One of the children inside the enclosure then got pretty excited and started running, and perhaps that’s what tipped them over the edge. It sounds like this lady stepped in to assist and the cheetahs then jumped on her.

‘We love the cheetahs here and always saw Mark and Monty as ambassadors for the species. It was never about the money for us, but we have loved allowing people the chance to experience these beautiful creatures up close.

‘We’ll re-evaluate the situation in a week or two and may let people in again if we feel it is safe to do so.’