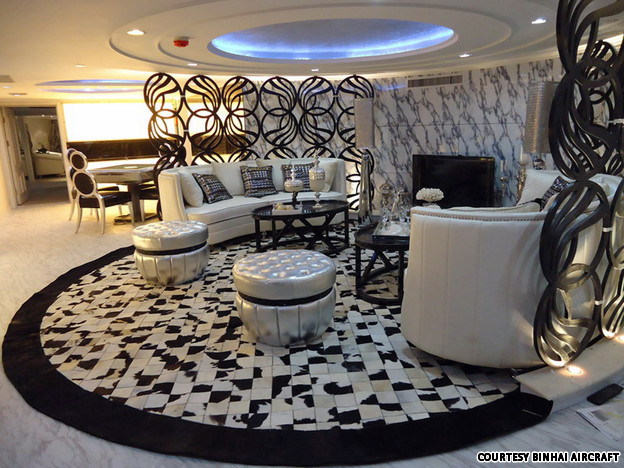 All three presidential suites on the Kiev are renovated in what passes here for lavish European style.
Alternative luxury hotels are popping up on the horizon in China faster than ever.

The country’s first ex-naval hotel opened on a former Soviet aircraft carrier in Tianjin on May 1.

US$15 million for an aircraft carrier hotel
The luxury hotel is part of Binhai Aircraft (天津滨海航母主题公园), an 80,000-square-meter military theme park opened in 2004 in east Tianjin. The government-supported park is built on and around a retired Kiev-class Soviet aircraft carrier, named Kiev (基辅号), which was sold to China in 1996.

The park’s parent company is reported to have spent an estimated US$15 million on the transformation and finished the refitting of three presidential suites last August.

The nightly rate for the 148-room hotel ranges from RMB 988 for a standard double to a staggering RMB 28,888 for the 400-square-meter presidential suites.

There is also a three-room family suite, which occupies roughly 100 square meters and costs RMB 8,888 to check in for a night.

Binhai is currently promoting an annual membership towards deep-pocketed Chinese travelers. For RMB 750,000 a year, the guest will have full access to all facilities onboard.

Binhai Aircraft’s vice marketing manager Mr. Liu noted that the company receives requests every year from visitors hoping to stay overnight on the Kiev, especially in the cabins in which sailors and officers once slept.

"The hotel will serve as a unique experience for a high-end clientele,” Liu told us. “It will not be ranked by stars, nor will it have a swimming pool or a gym.”

Decked out in black, green and white, the 30-seat restaurant pays tribute to the Kiev’s heritage by serving mostly Russian dishes.

The aircraft carrier restaurant will open non-stop from breakfast till 10 p.m. after the hotel officially opens.

Previous news: Puma clings on to wafer-thin lead on VOR Leg 6 from Itajai to Miami

Next news: Local tourists spur tourism surge in Hainan during May Day holiday