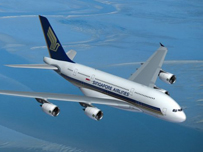 Two foreign commercial aircraft almost crashed into each other over Vietnam last month after an air traffic controller was “scared speechless,” but an official has claimed that the situation was not dangerous, a newswire reported.

VTC News said Sunday the incident occurred March 14 when a Singapore Airlines and Hainan Airlines plane were flying in opposite directions at a height of ten kilometers in airspace controlled by the Ho Chi Minh City Air Traffic Administration and Control Centre.

Another controller then had to “grab” the microphone from his colleague’s hand to order the aircraft to change their directions and altitude, the source said.

But Bui Van Vo, chief of Flight Operation Management Department, told VTC News that a subsequent investigation had found that the planes had been 30 miles [48 km] apart, well above the safe limit of 10 miles.

"The airplanes were safe,” he stressed.

The ground station’s radar system did receive a warning signal which is set off when aircraft approach within 30 miles of each other, he said.

However, even in the absence of instructions from the controller, the airplanes would not have crashed into each other, he said.

Asked whether the controller in charge had indeed been too scared to give instructions, Vo said there was not enough evidence to reach that conclusion.

The report went on to say that there had been a couple of near incidents recently, blaming it partly on excessive workload for ATCs.

Their salaries have not been increased much though the number of flights keeps going up, it said.

"At the moment air traffic controllers are facing work pressure,” Lai Xuan Thanh, deputy chief of the Civil Aviation Authority of Vietnam, was quoted as saying.

It is difficult to recruit ATCs given that the job demands excellent English skills, the working environment is highly stressful, and salaries are not very attractive, he added.

However, asked about the pressure involved, another CAAV official said that depends on individuals – some can instruct 20 flights at a time without making mistakes while another cannot handle more than two.

Next news: Chinese ships return to Hainan after stand-off with Philippine warship