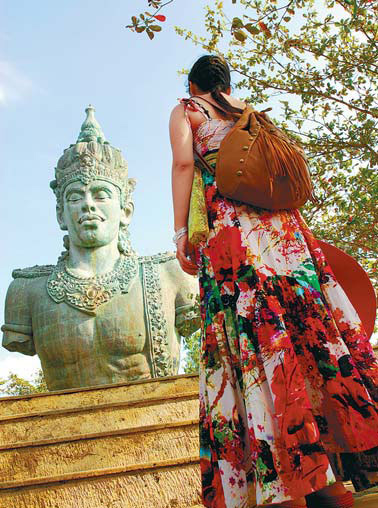 A tourist visits the biggest bronze statue in Bali, Indonesia.

The Chinese mainland is on its way to becoming the largest source of cross-border tourists in the world, according to a report released by the national tourism authority on Wednesday.

The Annual Report of China Outbound Tourism Development 2012, released by the National Tourism Administration and China Tourism Academy, said mainland tourists made 70 million trips to foreign countries, as well as to Hong Kong, Macao and Taiwan last year, up 22 percent from 2010.

Of the 4.4 percent increase seen in cross-border tourism last year, Chinese tourists contributed 30 percent of that. That came even as the tourism industry coped with the effects of the European debt crisis, the nuclear disaster in Japan and unrest in the Middle East and North Africa, she said.

"In the near future, the world’s largest source market of international trips will take shape in China," she said.

The report estimates that mainland tourists will make 78 million trips to overseas destinations this year, up 12 percent from 2011.

They are expected to spend $80 billion overseas this year, up from an estimated $69 billion last year.

"Domestic inflation and the appreciation of the yuan against the US dollar have worked together to strengthen the yuan’s purchasing power abroad," she said. "That has bolstered people’s willingness to travel."

The academy’s studies found that the number of overseas trips made by mainland tourists will increase by 4.36 percent if the yuan appreciates by 1 percent against the US dollar.

During last year’s National Day holiday, which came in the first week of October, mainland tourists’ spending on luxury goods overseas was equal to the total revenue from domestic sales of luxury goods over the course of three months, according to the report.

Dai Bin, head of the tourism academy, said a survey by the academy found that mainland tourists expressed less satisfaction than expected with some popular shopping destinations such as Hong Kong and France.

"Tourists are more satisfied with Spain, Malaysia, Russia and Germany, which have done a lot to improve tourist attractions and services," he said. The academy has yet to release its survey results.

"Destinations should bear in mind that Chinese tourists care about more than just getting loads of goods from abroad. They want good travel experiences, too," he said, calling on overseas destinations to improve the services they offer to Chinese tourists.

Li Meng, deputy director of the outbound tourism department of China International Travel Service, said nearby destinations such as Japan and South Korea have started to do more for Chinese tourists. Some, for instance, have put up signs written in Chinese.

Countries including the US and Australia have meanwhile taken steps to simplify the procedures mainland tourists must go through to obtain visas. But obstacles still remain in the application process of some other countries, he said.

Travel services are calling on European countries to simplify their visa procedures for Chinese citizens.

"A visa to go to Europe is now the most difficult (visa to get) for Chinese tourists," said Zeng Song, chairman of Hua Yuan International Travel. Each year the company sends about 600 tourists to Europe.

"European countries’ requirement that hukou (permanent household registration) documents be presented when someone applies for a visa has caused big troubles for both tourists and travel services," he said.

"China has changed in the past three decades. It’s a mobile society now, and the use of hukou has changed a lot."

He called on European countries to adjust their visa policies in accordance with current conditions.

Chen Ruiping, a retired worker from Jiangsu province, said her travel plans will depend in part on how easy it is to obtain visas from certain countries.

"My family had wanted to visit Japan, but my daughter’s passport was issued in Beijing and ours were issued in Jiangsu," she said. "According to Japan’s current visa policy, we have to apply for visas in Beijing and Shanghai, which is really troublesome."

She said her family has decided to visit Thailand this year.

Dai Bin said countries and regions could also improve the services they offer by providing more TV programs in Chinese and more tour guides who speak Mandarin. They could also do more to protect Chinese tourists’ safety and property.