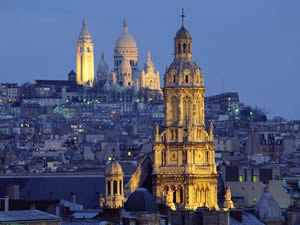 Image source: travelvivi.com
A recent global study has revealed that travel is more important than the internet, television and political diplomacy at boosting the economy and tearing down cultural barriers.

The study conducted on behalf of the Marriott International included feedback from 1,100 global travellers and opinion leaders from countries including Brazil, China, France, Germany, India, Spain, the UK and U.S.

The study found 96 percent of respondents who ranged under 35 to over 50 years felt that travel and tourism encourages the economy’s growth, while 77 percent said that the more people experiencing foreign countries and culture the more peace will spread.

"I believe we are entering a ‘Golden Age of Travel’ where opportunities to do business and travel abroad are opening up like never before," said Arne Sorenson.

According to the World Travel & Tourism Council (WTTC) the travel and tourism industry is expected to create an extra 69 million jobs by 2021 with up to 80 percent of which will be in Asia, Latin America, the Middle East and Africa.

WTTC estimates that total contributions of travel and tourism to the global gross domestic product (GDP) are predicted to increase by 4.2 percent annually to US$9.2 trillion by 2021.

Furthermore, visitor exports or the amount visitors spend in a given foreign country will rise 6.6 percent annually through 2021, increasing to US$1.8 trillion by 2021.

SOURCE: etravelblackboard.com
Editorial Message
This site contains materials from other clearly stated media sources for the purpose of discussion stimulation and content enrichment among our members only.
whatsonsanya.com does not necessarily endorse their views or the accuracy of their content. For copyright infringement issues please contact editor@whatsonsanya.com

Previous news: Puma, Telefonica battles at Strait of Malacca, to turn at S’pore & head to Sanya