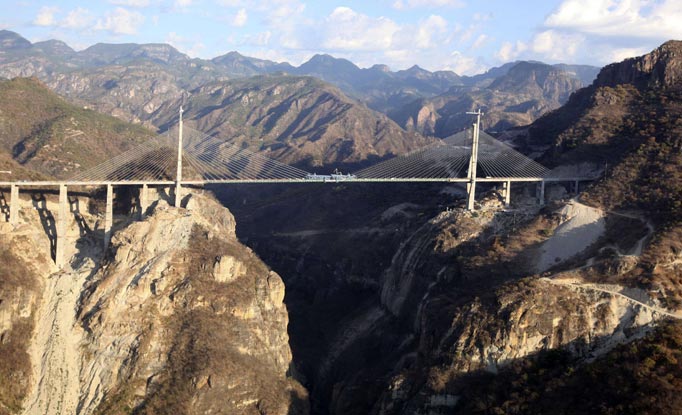 This is Mexico’s massive Baluarte Suspension Bridge which has just been crowned the highest in the world by the Guinness Book of Records.

The 1000m-long crossing, which has just opened to the public, is more than 400m high and could fit Paris’ Eiffel Tower under its central span.
The cable-stayed bridge – which goes across a deep ravine in Mexico’s Sierra Madre Occidental mountains – took four years to build and cost millions of pounds.

It was built as part of the country’s bicentennial celebrations to mark its independence from Spain in 1810.

It forms a huge highway between Mazatlan on the Pacific Coast to Durango in the interior.

Mexican President Felipe Calderon said: "It is a project which is going to unite the people from the north of Mexico like never before."

SOURCE: www.thesun.co.uk
Editorial Message
This site contains materials from other clearly stated media sources for the purpose of discussion stimulation and content enrichment among our members only.
whatsonsanya.com does not necessarily endorse their views or the accuracy of their content. For copyright infringement issues please contact editor@whatsonsanya.com

Next news: Boao Forum for Asia to kick off in April & focus on Asian change