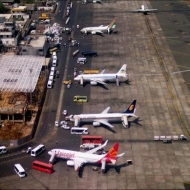 China will start work on the world’s highest airport next year, in Tibet’s Nagqu town, state media said on Tuesday, which will be about 100 metres (328 ft) higher than the existing record holder in another part of the remote and restive region.

It did not say when the airport would open nor how much it would cost.

Tibet already has five civilian airports, at least two of which are only open for a few months of the year because of extreme weather which makes flying impossible the rest of the time.

China has embarked upon a multi-billion-dollar programme in recent years to revamp old airports and build new ones, especially in the country’s remote west, as a way of boosting the economy.

The government has also poured billions of dollars into Tibet, hoping to win hearts and minds in a region the Communist Party has run with an iron grip for six decades.

The government says that the new airports, roads and a railway to Tibet will promote development and help raise living standards.

But Tibet activists say the new links will speed up the pace of Chinese migration there and dilute Tibetan Buddhist culture.

SOURCE: moneycontrol.com
Editorial Message
This site contains materials from other clearly stated media sources for the purpose of discussion stimulation and content enrichment among our members only.
whatsonsanya.com does not necessarily endorse their views or the accuracy of their content. For copyright infringement issues please contact editor@whatsonsanya.com