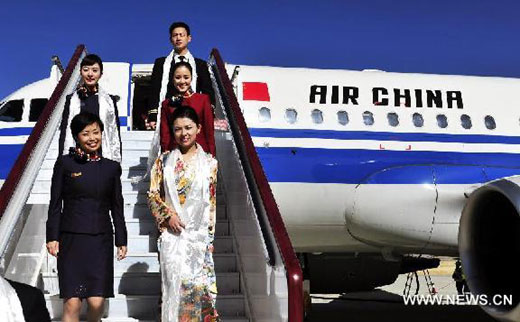 Flight attendants walk out of the plane in Gongga Airport in Lhasa, capital of southwest China’s Tibet Autonomous Region, Dec. 15, 2011. The first non-stop flight from Beijing to Lhasa made its four-hour maiden voyage on Thursday.

A new non-stop flight between Beijing and Lhasa, which is expected to boost tourism in the Tibet autonomous region, went into operation on Thursday.

Previously, services between the capital and the southwestern region had to stop for refueling in Chengdu, Sichuan province.

The aircraft, which have about 130 seats, have been modified to cope with flying from Lhasa airport, which sits 3,700 meters above the sea level, said Wang Changshun, general manager of China National Aviation Holdings, Air China’s parent company.

Tourism is a key industry for the Tibet economy. Last year, the region received 6.85 million tourists from home and abroad, generating revenue of 7.14 billion yuan ($1.1 billion), 14 percent of its total GDP.

The new direct flight is expected to help the region in its goal of receiving 15 million visitors in 2015.

"It (the Air China service) shortens the distance between Beijing and Tibet and shows the central government’s concern about Tibet’s development," said Qin Yizhi, deputy chairman of the autonomous region.

The direct flight leaves Beijing at 8:05 am and arrives at Lhasa at 12:25 pm, with returning flights leaving the region at 1:15 pm and landing in the capital at 5:05 pm.

An economy class ticket costs 2,430 yuan, the same as the flights that stop in Chengdu.

Potential tourists have also welcomed the flight, with many going online to express their hopes that similar flights will soon start running from other major Chinese cities.

However, Cao Yongqiang, a manager of a computer software company in Beijing, said he believes the flight is unlikely to ease the difficulty of buying tickets at peak travel times, such as from July to September.

"They may need to use bigger planes," he added.

The region has already taken steps to expand its civil aviation industry to boost tourism.

So far, five airlines have opened flights to Lhasa, connecting it with at least 10 cities in other Chinese provinces and regions.

Five civil airports have been built in Tibet, with two opened to traffic last year. Tibet Airlines was also established in July to link airports within the region.

Qin said that a sixth airport will be built in Nagqu prefecture during the period of the 12th Five-Year Plan (2011-2015).

"Upon completion, all six prefectures will have access to air travel," he said.

SOURCE: www.chinadaily.com.cn
Editorial Message
This site contains materials from other clearly stated media sources for the purpose of discussion stimulation and content enrichment among our members only.
whatsonsanya.com does not necessarily endorse their views or the accuracy of their content. For copyright infringement issues please contact editor@whatsonsanya.com

Next news: Hainan in talks with Cebu to open Hainan-Cebu direct flights