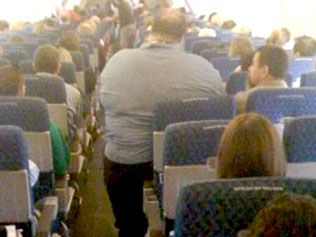 A passenger on a US Airways flight said he was forced to stand for seven hours after he was squeezed out of his seat by an obese man sitting next to him.

"I didn’t fly from Alaska to Philadelphia on Flight 901,” Arthur Berkowitz told Christopher Elliott, a consumer advocate who operates elliott.org. “I stood.”

"His size required both armrests to be raised up and allowed for his body to cover half of my seat,” Berkowitz said. “It did not allow me to use my seatbelt during takeoff and landing as well as required me to stand in the aisle and galley area for most of the seven-hour-plus flight.”

The incident occurred on July 29 and was first reported by Elliott on Tuesday.

Berkowitz said he alerted flight attendants to the problem, but they were unable to accommodate him, according to his account on elliott.org. “They were sympathetic, but they could not do anything. No other seats existed on plane. They would not permit me to sit in their jump seats, and fully acknowledged the mistake by their gate agent, in allowing this individual on plane without requiring him to purchase and occupy two seats,” he said.

Liz Landau, a spokesperson for US Airways, confirmed that Berkowitz was inconvenienced by a passenger of size and told msnbc.com “it was his choice to stand.”

"His seatmate had the same right to his seat as Mr. Berkowitz did to his. So here’s where the diplomacy and cooperation of all passengers comes into play,” the airline said in a statement.

Berkowitz was unhappy with the $200 voucher the airline offered him for his experience, at which point he contacted Elliott.

"We have attempted to address this customer’s service concerns,” the airline statement said, “but offering increasing amounts of compensation based on a threat of a safety violation isn’t really fair — especially when the passenger himself said he didn’t follow crew members’ instructions and fasten his seatbelt.

"The way to ensure you have space available next to you — whether you are a person of size, or you would simply like to ensure you have more personal space to relax on a long flight — is to purchase that additional seat, or First Class, in advance.”

SOURCE: overheadbin.msnbc.msn.com
Editorial Message
This site contains materials from other clearly stated media sources for the purpose of discussion stimulation and content enrichment among our members only.
whatsonsanya.com does not necessarily endorse their views or the accuracy of their content. For copyright infringement issues please contact editor@whatsonsanya.com

Next news: 11th World Toilet Summit and Expo kicked off in Haikou