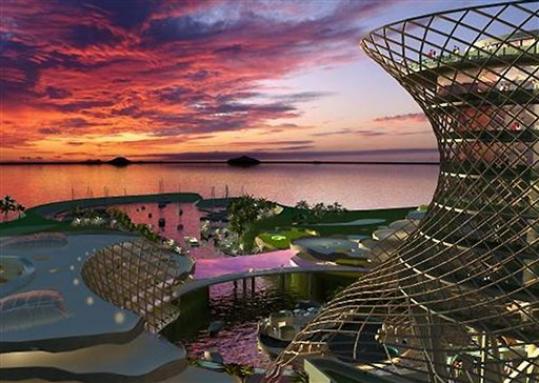 In announcements in the U.S. and China coinciding with a Friday groundbreaking, Las Vegas-based Caesars, the world’s largest casino company, said its debut property in the Asia-Pacific region would introduce it to a fast-growing market.

"The ‘Aha!’ moment for me was the level of demand that exists in rapidly developing countries for high-end hotels like this," CEO Gary Loveman said in an interview with The Associated Press. "This is the first step in the development of our Caesars brand in China and India."

Loveman compared the island, with China’s only west-facing shoreline, to Hawaii and said he hopes to attract Chinese visitors to become members of Caesars loyalty programs.

"Gaming is only legal in a small number of places in the world," he said. "This brings the Caesars brand to places where gambling is not permitted but where the brand is held in high regard."

The $470 million (3 billion Chinese yuan) resort is the first major venture for Caesars Global Life, a non-casino division that privately held Caesars created in May to license, franchise and manage hotels outside the U.S.

Loveman said his goal is to develop 25 hotels and resorts in China over the next five years.

Caesars Palace Longmu Bay is designed by Australia-based PTW Architects. It is a partnership between Caesars and with Guoxin Longmu Bay Investment Holding Co. Ltd., a subsidiary of the Chinese investment and development company Jiangsu Guoxin Investment Group Limited.

Plans call for two entertainment venues offering high-profile shows, a 36-hole championship golf course, a marina, spa, shopping and restaurants. The resort is to open in 2014.

There are other hotels on the island, but Loveman said he saw demand for a number of competing brands. MGM Resorts International plans to open a resort dubbed MGM Grand Sanya on Hainan Island later this year.

SOURCE: www.cbsnews.com
Editorial Message
This site contains materials from other clearly stated media sources for the purpose of discussion stimulation and content enrichment among our members only.
whatsonsanya.com does not necessarily endorse their views or the accuracy of their content. For copyright infringement issues please contact editor@whatsonsanya.com