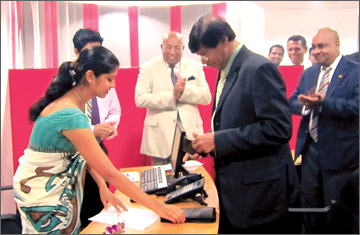 "We will be flying a Boeing 737-800 aircraft to Colombo which will have eight business class seats and 154 economy class seats initially and we will upgrade our aircraft at the time that Colombo-bound traffic improves,” Hainan Airways Colombo General Manager Brian Yang told Daily News Business yesterday.

The opening ceremony of the offices of Air Global (Pvt) Ltd, the Hayleys Leisure Holdings subsidiary which has been appointed as the General Sales Agents for Hainan Airways took place at R.A. De Mel Mawatha yesterday. Air Global Manager Sudeshini Jayawardena said with the passage of time, the airline will extend the Colombo service to Male as well.

"There are a large number of Chinese tourists who like the sea beaches who already go to Male and they will now come to Colombo as well in addition to a large number of Chinese employees for Sri Lankan projects. But, the religious tourism segment is something that has to be promoted,” she said. Asked whether there was a promotion of religious tourism among Chinese tourism, she said that it was the mandate of Sri Lanka Tourism Board. “We are promoting the Colombo/ Bangkok/Beijing sector as well as there are a lot of Sri Lankans who now prefer to tour Beijing over Bangkok,” she said.

She also said Hainan enjoys exclusivity of Terminal One of the Beijing Capital International Airport.

Hayleys Group Chairman Mohan Pandithage, in his opening remarks at the launch of the new GSA office said Hayleys has been in airline representation for over 15 years and that he was passionate about expanding the airline portfolio of the Group.

He also thanked the Civil Aviation Authority for expediting the entry of Hainan into Sri Lanka.

SOURCE: www.dailynews.lk
Editorial Message
This site contains materials from other clearly stated media sources for the purpose of discussion stimulation and content enrichment among our members only.
whatsonsanya.com does not necessarily endorse their views or the accuracy of their content. For copyright infringement issues please contact editor@whatsonsanya.com

Next news: Sanya listed among top 5 retirement places in China