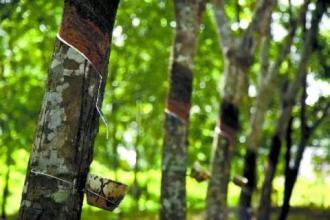 Shares of Hainan Rubber nearly doubled in its Shanghai trading debut on Friday after a $ 709 million initial public offering, as investors flocked to rubber stocks after prices of the commodity hit a record.
A strong debut by Hainan Rubber, which owns the world's largest rubber plantations, augurs well for other large new issues in the pipeline in China, including the $1.4 billion IPO of top wind turbine maker Sinovel Wind Group Co Ltd.
Spot rubber prices in Thailand, the world's biggest producer, rose more than 70 percent to a record high of $ 4.96 in 2010 after heavy rains trimmed supplies in key producing countries that include India and China.
"Natural rubber prices will stay at a high level in 2011," Sinolink Securities analyst Liu Bo said in a research note published on Thursday.
Hainan Rubber has an edge over its peers because of its size, Liu said.

Tokyo rubber futures hit another record high on Friday but then ended the day lower as investors liquidated contracts to take profits ahead of the weekend.
Hainan Rubber closed up 84 percent at 11.01 yuan ($ 1.66) on the Shanghai Stock Exchange, off an intraday high of 12.36 yuan and compared with its IPO price of 5.99 yuan.
The benchmark Shanghai Composite Index inched up 0.5 percent, ending the first week of the year up 1.1 percent to start off on a positive note after shedding over 14 percent in 2010.
The firmer stock market had bolstered performance of new issues this week, including Hainan Rubber, said analysts.
"Investors are more likely to chase up new issues when the broader market is doing well," said Zhang Yanbing, an analyst at Zheshang Securities in Shanghai.
On the country's Nasdaq-style Chinext market in Shenzhen, Tianli Environmental Protection Engineering , which provides energy saving solutions to steel mills, and LandOcean Energy , a software developer focusing on the oil industry, also traded above their IPO prices on Friday.
Hainan Rubber, a leading Chinese rubber producer based in the southern island province of Hainan, last month priced its IPO at the top end of an indicative range of 5.50 to 5.99 yuan, benefitting from good timing on rubber prices.
Wind turbine maker Sinovel set the offer price for its Shanghai IPO on Thursday at 90 yuan per share — the top end of an indicative range of 80-90 yuan, signaling investor confidence in China's renewable energy sector.
Sinovel has not yet fixed a listing date. It will trade under the symbol "601558".

China was the world's top IPO market in 2010, with companies raising more than 400 billion yuan in proceeds in Shanghai and Shenzhen.
Analysts expect the country's IPO market to remain active in 2011, as companies, especially state-owned enterprises, insurers, securities companies and regional banks, seek to tap the stock markets this year to beef up capital for expansion.
In the latest such plans, sources told Reuters on Friday that Jiangsu Jiangyin Rural Commercial Bank (JRCB) aims to raise about 2 billion yuan ($ 300 million) through an IPO in Shanghai this year.
SOURCE: af.reuters.com
Editorial Message
This site contains materials from other clearly stated media sources for the purpose of discussion stimulation and content enrichment among our members only.
whatsonsanya.com does not necessarily endorse their views or the accuracy of their content. For copyright infringement issues please contact editor@whatsonsanya.com

Next news: China continues to adopt dampening measures on real estate in Haikou