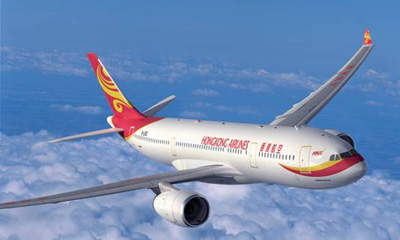 Hong Kong Airlines A330-200.
The Chinese government has blocked an order from Hainan Airlines’ subsidiary Hong Kong Airlines for 10 Airbus A380 aircraft, according to widespread news reports. The order had been scheduled to be announced at last week’s Paris Air Show.

An industry insider confirmed to ATW that the Hong Kong-based carrier had to postpone the order because Beijing failed to give the airline a "green light," in part to express its disapproval of Chinese carriers’ inclusion in the EU Emissions Trading Scheme starting next year. In a statement released last month, the China Air Transport Assn. noted it would urge the Chinese government to "impose much tougher retaliation measures" against the EU over the ETS, which it said could "severely impact" the "friendly cooperative relations between Chinese and European carriers as well as European aircraft manufacturers." The organization estimated that the ETS will cost Chinese carriers CNY800 million ($123.6 million) annually.

CATA sent representatives to Brussels in May to negotiate with the EU on exempting Chinese carriers from the ETS, but little progress has been made. This month Airbus and the European Airlines Assn. jointly wrote to the EU, warning it was "madness to risk retaliation" from China over the ETS. But the EU has not backed down as yet.

SOURCE: www.atwonline.com
Editorial Message
This site contains materials from other clearly stated media sources for the purpose of discussion stimulation and content enrichment among our members only.
whatsonsanya.com does not necessarily endorse their views or the accuracy of their content. For copyright infringement issues please contact editor@whatsonsanya.com

Next news: 2,050 fishing boats in Hainan get GPS navigation for protection