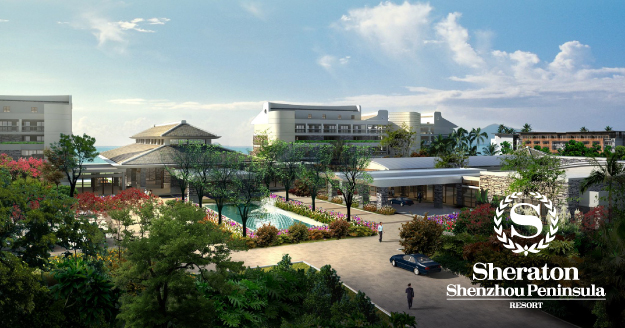 Adding even more muscle to its portfolio in China, Starwood Hotels & Resorts Worldwide, Inc /quotes/zigman/410958/quotes/nls/hot HOT -0.06% today announced that its iconic Sheraton brand will open seven more hotels in China before the end of September. News of these openings coincides with a month-long relocation of Starwood’s global headquarters to Shanghai, China. This unprecedented managerial endeavor highlights Starwood’s evolution as a global company and the development boom in China.

In the next two years, nearly half of all new Starwood hotels slated to open in China will fly the Sheraton flag. This summer, Sheraton will open its second hotel in Beijing, its second in Xian, and its first in Chongqing, Yantai, Guangzhou, Zhenjiang, Wanning and Hangzhou. This surge in new hotel openings will grow the Sheraton brand’s footprint not only in China’s largest and most established cities, but also in many of the country’s fast-growing metropolises and resort destinations. With the addition of these seven hotels, Sheraton will grow its portfolio to 42 hotels in China by year’s end, moving Starwood closer to its goal of operating 100 hotels in China by the end of 2012.

"The remarkable success of Sheraton in China continues to drive Starwood’s growth and widen its position as the country’s leading operator of four and five star hotels," said Hoyt Harper, global brand leader for Sheraton Hotels & Resorts. "Sheraton is focused on meeting the needs of Chinese travelers within China, as well as across our portfolio of more than 400 hotels around the world."

China will play an outsized role in global travel over the next decade, with 100 million outbound travelers expected by 2015. China also continues to be the richest source of new loyal travelers for Starwood, as evidenced by the 71% jump in Chinese enrollment in Starwood Preferred Guest last year. Starwood’s first-mover advantage in China dates back to 1985 with the landmark debut of The Great Wall Sheraton Hotel in Beijing, the first international branded hotel in China.

"The rich legacy of the Sheraton brand in China has given Starwood a considerable head start in this fertile market, where we now have 74 hotels flying eight of Starwood’s nine brand flags and another 90 in development," said Miguel Ko, Chairman and President of Starwood’s Asia-Pacific Division, a Chinese native who began his career with Starwood in 1979. "We attribute our success in China to our longstanding native Chinese teams plus our strong relationships with local owners who recognize the tremendous benefits of joining the Starwood network."

Sheraton Beijing Dongcheng Hotel will open on Beijing’s north Third Ring Road in the heart of the city’s transportation network. The new hotel will feature 441 guest rooms and a variety of international cuisine at its four restaurants, as well as more than 25,000 square feet of meeting and function space. Guests will enjoy convenient easy access to Tiananmen Square, Financial Street, Forbidden City and the Great Wall. Sheraton Beijing Dongcheng Hotel will be the second Sheraton in Beijing, where the brand first debuted more than 25 years ago.

Sheraton Zhenjiang Hotel, located in the heart of the city, will be just steps from a variety of upscale shopping and entertainment. It will be the first Sheraton in Zhenjiang and will feature 289 guest rooms and suites, indoor pool, fitness center, spa, several restaurants and more than 33,000 square feet of meeting facilities. Zhenjiang is an important transportation hub within Jiangsu province and one of China’s busiest port cities.

Sheraton Shenzhou Penninsula Resort will offer a prime beachfront location on Hainan Island to the southeast of Wanning City. Marking the Sheraton brand’s debut on Hainan Island, Sheraton Shenzhou Penninsula Resort will feature 307 rooms, more than 9,000 square feet of meeting space, a Shine Spa for Sheraton, and swimming pool surrounded by tropical gardens. Known as the "Hawaii of the East," Hainan Island offers a variety of outdoor recreation including golf, fishing and water sports.

Sheraton Hangzhou Wetland Park Resort will be set in a picturesque location in the Yangtze River Delta on China’s southeastern coast. The first Sheraton to open in Hangzhou, Sheraton Hangzhou Wetland Park Resort will offer 383 guest rooms, more than 12,000 square feet of meeting space, three restaurants and a spa. One of China’s seven ancient capitals, Hangzhou is the current capital of Zhenjiang Province and is known for its breathtaking landscapes and wealth of historic sites. Guests will enjoy proximity to Hefang Street, a pedestrian street lined with shops and teahouses, museums and numerous corporate offices.

The 445-room Sheraton Guangzhou Hotel will be located in the heart of Guangzhou’s Tianhe central business district and will be part of Tee Mall, the leading commercial and shopping complex in the city. The hotel is located just steps from the newly renovated Guangzhou Sports Centre.

The Sheraton Guangzhou Huadu Resort will open in Beixin Town in the northeastern part of Huadu city in China’s Guangdong Province. The magnificent resort will feature more than 100 remarkable deluxe rooms, villas, and suites providing guests with exhilarating views. The brand new resort will sit at the Li Zui Reservoir, surrounded by picturesque mountains and lakes. The hotel is located 45 minutes by car from downtown Guangzhou, and 15 minutes from Huadu and Guangzhou Baiyun International Airport (CAN).

Sheraton Hotels & Resorts, like all brands within Starwood’s robust portfolio, is proud to offer the Starwood Preferred Guest(R) program, which made headlines when it launched in 1999 with a breakthrough policy of no blackout dates on Free Night Awards. SPG(R) offers members the ability to redeem awards at more resorts, more luxury properties, more European hotels and more golf properties than any other hotel program.

Sheraton helps guests make connections at more than 400 hotels in 70 countries around the world and recently completed a $6 billion global revitalization and is now in the midst of a $5 billion global expansion over the next three years. Sheraton is owned by and is the largest and most global brand of Starwood Hotels & Resorts Worldwide, Inc., one of the leading hotel and leisure companies in the world with 1,051 properties in 100 countries and territories with 145,000 employees at its owned and managed properties. Starwood Hotels is a fully integrated owner, operator and franchisor of hotels, resorts and residences with the following internationally renowned brands: St. Regis(R), The Luxury Collection(R), W(R), Westin(R), Le Meridien(R), Sheraton(R), Four Points(R) by Sheraton, and the recently launched Aloft(R), and Element(SM). The company boasts one of the industry’s leading loyalty programs, Starwood Preferred Guest (SPG), allowing members to earn and redeem points for room stays, room upgrades and flights, with no blackout dates. Starwood Hotels also owns Starwood Vacation Ownership, Inc., one of the premier developers and operators of high quality vacation interval ownership resorts. For more information, please visit www.starwoodhotels.com .

SOURCE: www.marketwatch.com
Editorial Message
This site contains materials from other clearly stated media sources for the purpose of discussion stimulation and content enrichment among our members only.
whatsonningbo.com does not necessarily endorse their views or the accuracy of their content. For copyright infringement issues please contact editor@whatsonsanya.com