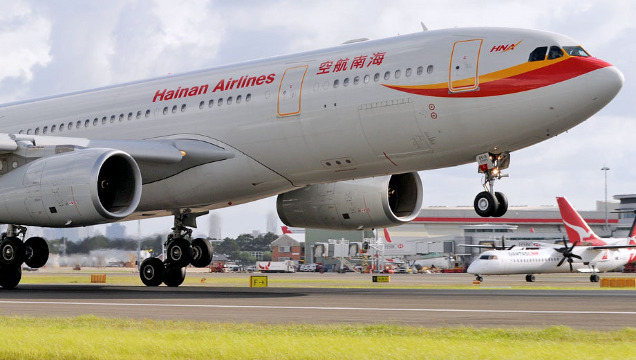 Save $2,000 on direct flights by flying to Shenzhen on Hainan Airlines instead of Hong Kong
China’s Hainan Airlines has started a fare war to the Hong Kong region, slashing direct tickets from Sydney to its Shenzhen hub and undercutting its nearest competitor in business class by over A$2000.

Any fare war is great news for business travellers, especially for small and medium businesses and other price-conscious business travellers. (Let’s face it, "oh, I just saved the company $2000 by flying to Shenzhen instead of Hong Kong" is a good look for any corporate flyer.)

Hainan is offering a ticket price of A$3500 to Shenzhen, less than an hour away from Hong Kong by road or rail.

Competitor prices for non-stop flights in business class for flights from Sydney to Hong Kong in August-September include:

Fares are in Australian dollars, quoted from fare aggregator Kayak as of 23 May.

Hainan Airlines flies an Airbus A330 on the Sydney-Shenzhen three times a week, and is offering the new fares for the next 12 months.

The flight leaves Sydney at 1010 on Tuesdays, Thursdays and Sundays, arriving in Shenzhen at 1640.

On the return, Hainan’s plane leaves Shenzhen at 1700 on Mondays, Wednesdays and Saturday and arriving in Sydney at 0740 the next day.

(The flight also continues on to Hangzhou after a brief stop in Shenzhen, but the special fares are only on offer to Shenzhen.)

The business class cabin is six rows of a 2-2-2 configuration. The seats are lie-flat angled seats rather than fully flat beds.

Picture: McLaren Shen
In comparison, flat-bed offerings from competitor Cathay Pacific out of Hong Kong include a 1-2-1 business class configuration on its own A330 planes, where every passenger has access to the aisle.

Virgin Atlantic (which also flies the Hong Kong-Sydney route, and is the next cheapest option) uses a 1-1-1 configuration in Upper Class on its A340s.

As for lounge access, in Sydney, Hainan passengers get to use the Malaysia Airlines lounge on pier C. In Shenzhen, Hainan’s own lounge is available.

Hainan is also including a coach to Hong Kong in its fares, which will whisk passengers from Shenzhen over the border into Hong Kong.

SOURCE:www.ausbt.com.au
Editorial Message
This site contains materials from other clearly stated media sources for the purpose of discussion stimulation and content enrichment among our members only.
whatsonsanya.com does not necessarily endorse their views or the accuracy of their content. For copyright infringement issues please contact editor@whatsonsanya.com

Next news: Over 10,000 bottles of fake liquor seized, 17 arrested in Hainan