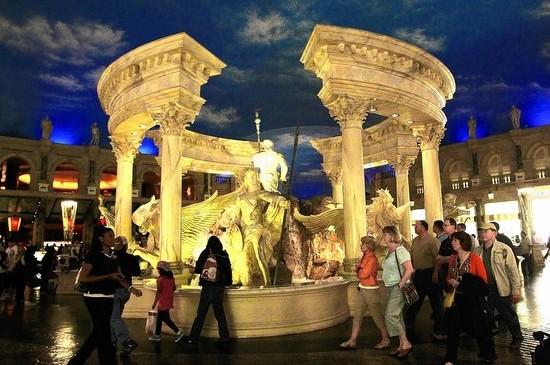 Caesars is lending its name to hotels in Asia that don’t
have casinos. Above, Caesars Palace in Las Vegas.
Caesars Entertainment Corp., eager to set up shop in parts of Asia where gambling isn’t allowed, plans for the first time to lend its brands to hotels that don’t have casinos.

The move by Caesars, which changed its name from Harrah’s Entertainment Inc. last year, marks something of a shift in the Las Vegas hotel and casino operator’s strategy and follows in the footsteps of competitor MGM Resorts International.

It comes as the company remains shut out from gaining gambling licenses to operate in the two Asian gambling markets that have the highest growth prospects in the world—Macau and Singapore—and its U.S. markets remain sluggish.

"There’s so much dynamism in Asia, that you have to find a way to participate," Chief Executive Gary Loveman said in an interview Wednesday. "In gaming, you can’t go where the politicians don’t allow you to go, so you have to find something else you do that’s less controversial."

Mr. Loveman says the "non-gaming luxury hotels" would primarily be situated in underserved markets in Asia, particularly India, China and southeastern parts of the continent. However, he said he could see the strategy working in parts of Europe as well.

The hotels would operate under brand names owned by the company, including Caesars and Flamingo, which the CEO says are widely recognized in Asia.

Caesars owns and operates casinos across the U.S., including in Atlantic City and Las Vegas. Nearly all of its domestic markets struggled during the downturn and have yet to show signs of significant recovery, making it difficult for Caesars to chart a strategy for significant growth.

Revenue sank since the company was taken private by TPG Inc. and Apollo Management LP in a $27.8 billion buyout at the height of the credit boom before the recession. The debt taken on to finance the deal has been a heavy weight on Caesars. The debt, combined with the lack of enough clear growth opportunities and other factors, prompted investors to balk on a planned initial public offering last fall.

Unlike its major Las Vegas-based competitors, the company doesn’t own a license to operate in Macau, the booming China gambling enclave that saw enormous growth in spending on gambling even as Caesars’ U.S. markets, which Mr. Loveman said represents 90% of revenue for the company, have struggled.

The company has announced plans for two new casinos through a joint venture in Ohio and a new hotel tower and giant Ferris wheel in Las Vegas, but they represent small opportunities compared with the Asian gambling markets.

In 2007, MGM Resorts launched MGM Hospitality, which plans to operate standalone hotels under its Bellagio and MGM Grand and Skylofts brands. Later this year, the first of its hotels will open in Sanya, a beach resort in Southern China. The company is also working on several other projects in China, said a spokesman.

The strategy, common in the hotel industry, is a relatively limited-cost and low-risk way to expand abroad since the company doesn’t own the hotels but rather collects a share of the revenues from the owners that provide land and capital. Caesars already manages and lends brand names to third party owners for some casinos on Indian reservations in the U.S.

"MGM has moved into this direction and I think they’ve done a very good job at it," Mr. Loveman said. He didn’t specificy whether or not Caesars would operate the hotels abroad, as MGM plans to do.

Mr. Loveman says Caesars would license its brand to developers that are building new resorts and hotels, as well as provide access to lodging management systems and other services.

The profits involved are likely to be small compared with the profits from large casino properties that are fully owned by casino companies. The move, however, could help position Caesars to add casinos should gambling become legal in the jurisdictions where it licenses hotels. It could also help to attract more foreign visitors to Caesars’ casinos in Las Vegas.

SOURCE: online.wsj.com
Editorial Message
This site contains materials from other clearly stated media sources for the purpose of discussion stimulation and content enrichment among our members only.
whatsonningbo.com does not necessarily endorse their views or the accuracy of their content. For copyright infringement issues please contact editor@whatsonsanya.com

Next news: Haikou Agriculture invests in Haikou Cooperative with RMB51.55m