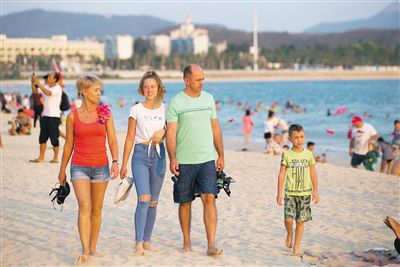 Overseas visitors can now claim tax refunds on purchases in south China's island province of Hainan as the rebate plan went into effect on Saturday.

Deputy governor of Hainan Tan Li announced the inauguration of the tax refund scheme on Saturday morning at Shengsheng Department Store in the capital city Haikou.

The rebate scheme is expected to bring much business to the shopping center, said Shan Rongsheng, general manager of Shengsheng Department Store.

"We shall diversify our groceries to cater to the demand of overseas tourists. In the meantime, we shall ensure the quality of our commodities," said Shan.

According to the tax plan, foreign tourists or citizens from Hong Kong, Macao and Taiwan who have lived in China's mainland for no more than 183 days can receive a rebate of 11 percent of consumer goods purchased within90 days before departing the island.

The minimum purchase on which a tourist can apply for tax refunds is 800 yuan (120 U.S. dollars).

The goods should remain in an unused condition to be eligible for the rebate.

Hainan is the first region nationwide to pilot the scheme.

The Chinese government announced a plan in January 2010 to build the tropical island into a top international tourism destination by 2020.

To achieve the goal, Hainan added five more countries to its visa-free list in August, allowing tourist groups from 26 countries to enjoy visa-free access for up to 15 days.

Hainan received more than 23 million tourists who stayed at least one night during the first 11 months of 2010, up 11.6 percent from a year earlier, according to Hainan's statistics bureau.

SOURCE: CRIEnglish.com
Read more:
Hainan duty free rebate for overseas tourists to be implemented from Jan 2011
Editorial Message
This site contains materials from other clearly stated media sources for the purpose of discussion stimulation and content enrichment among our members only.
whatsonsanya.com does not necessarily endorse their views or the accuracy of their content. For copyright infringement issues please contact editor@whatsonsanya.com