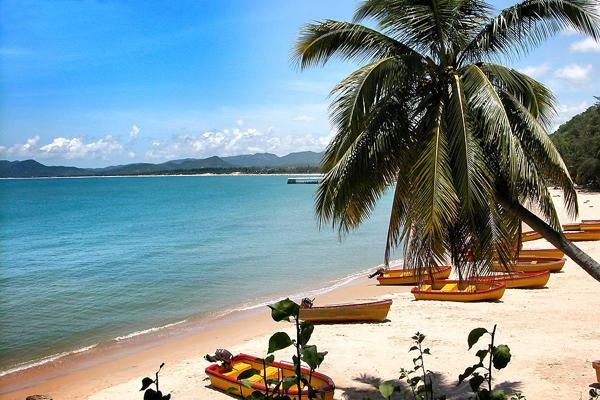 A beach in Sanya
Hainan paradise is in danger due to over-development of hotels & resorts in recent years
In the 1970s, the American rock band the Eagles released their album Hotel California, including a song called "The Last Resort". They sang about "a place people were smilin’" before "some rich men came and…put up a bunch of ugly boxes…. People bought ’em, and they called it…the place to be…. They call it paradise, I don’t know why. You call someplace paradise, kiss it goodbye."

China has a paradise, and it’s not the Shangri-la of myth. Due south of the mainland’s southernmost tip lies the subtropical province of Hainan – a lush, mountainous, sparsely populated island, bigger than Belgium and Massachusetts and nearly the size of Taiwan. The Li ethnic minority has lived there for three thousand years, farming, fishing, making colorful brocades and delicate woodcrafts, digging for jade, and harvesting pearls. Chinese tourists seek reprieve from hectic, crowding cities on Hainan’s scenic coasts.

A year ago, China’s State Council announced plans to transform the island into an international resort destination by 2020. China’s Hawaii. The stream of foreign investment into Hainan is becoming a river. Property prices are soaring, with the island’s two largest markets posting roughly 40 percent gains in 2010. The State Council expects tourism revenue to grow six-fold in 10 years.

Beachfront development, which was already accelerating, is happening at breakneck speed. A huge tourist city is springing up along the coast of Sanya, the second largest city. Hainan is currently building more luxury resorts than anywhere else on earth, with 27 hotels in the pipeline for Sanya’s Haitang Bay alone, where every inch of its 21-kilometer sandy shore is slated for development. Somewhere between 100 and 300 golf courses are expected to open in the next few years. Infrastructure is expanding rapidly, including high-speed rail and larger airport capacity. The government is luring visitors from select countries with exemptions from visa requirements, and Beijing recently decided to make Hainan a duty-free zone. There is even talk of letting in the gaming industry, starting with horseracing.

The Chinese economic "miracle" is happening again, this time on Hainan, but with familiar consequences. Pollution is rising. Traffic is growing heavy. Development is occurring haphazardly. However, smart planning and regulation can control these ill effects. Transportation improvements can eventually catch up with population growth and spiking tourist arrivals. Municipalities can stipulate energy-efficient buildings and architectural designs harmonious with the ecosystem and landscape.

The grave threat is to the island’s culture and the livelihood of its native inhabitants. Investors are paying rich prices for coastal property and attractively located farmland, and local farmers and fishermen must now make way for apartments and hotels. They are being relocated to towns where they have neither the money nor skills to survive. Provincial development commissions are seeing traditional arts and customs not as sacred elements of Hainan’s culture, but rather as potential tourist draws. Near Haitang Bay, construction has begun on seven small "folk towns" to replicate the centuries-old island life disappearing right on their fringe.

China has a long, magnificent history. However, rapid modernization is sacrificing vestiges of the country’s diverse, unique past. Hutong life in Beijing is vanishing at a distressing rate. Countless historic structures in Shanghai now live only in photographs and memory. We cannot undo preservation mistakes. Thankfully, Hainan’s future is not set. There is still time for development to occur in a manner that spares and respects the island’s environment and traditional way of life. The government can draw lessons from places like coastal Bali where development is causing ecological damage and victimizing its success, versus Hawaiian islands like Maui or Kauai, where ecotourism principles have helped protect natural resources and heightened visitor appeal.

In the long run, tourist destinations succeed not by allowing unchecked growth but by safeguarding what attracted visitors from the start. With a farsighted approach, Hainan has the opportunity to become a worldwide development model and even redefine the Chinese miracle. China must rise to the challenge of calling Hainan paradise, without kissing it goodbye.

SOURCE: China.org.cn
Editorial Message
This site contains materials from other clearly stated media sources for the purpose of discussion stimulation and content enrichment among our members only.
whatsonsanya.com does not necessarily endorse their views or the accuracy of their content. For copyright infringement issues please contact editor@whatsonsanya.com

Next news: 8 killed, 7 injured in car accident on Shenyang-Haikou expressway