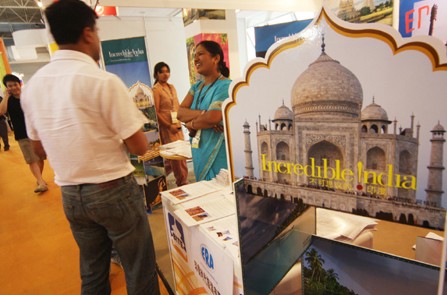 The Indian booth of a recent international tourism expo in Beijing. Eyeing
China’s great potential in outbound traveling, India is expecting an increase
in the number of Chinese tourists visiting its scenic spots and heritage sites this year.
Think about the population of China and India and the newly affluent middle class with money to spend. Imagine more favorable government policies and increased airline flight services. Then you can get a picture of the booming bilateral tourism of the two Asian giants.
"The tourism market between China and India is developing really fast and we find the growth potential to be huge," said Zhuge Hong, general manager of Sanya Holiday Travel India Ltd.

"There is a growing interest from Indian tourists in China and the same holds true for the Chinese," Zhuge said. "The time is appropriate. If we came to India five years earlier, it would be a lot more difficult for us to promote our tourism."

Closer business and government cooperation between China and India and the booming bilateral trade, which is set to exceed $60 billion this year, have helped fuel tourism between the two countries.

In 2009, 96,997 Chinese tourists made their way to India, accounting for 1.9 percent of total foreign arrivals in the country. About 41.5 percent of Chinese tourists came to India for leisure, holidays and recreation while 50.4 percent came for business and other professional reasons. A total of 4.1 percent were visiting friends and relatives, according to the Tourism Ministry of India

Although China came in at 12th among the tourist generating markets for India, it is the fastest growing market with a compound annual growth rate of 16 percent.

This explains why the Chinese market has become one of the most coveted, especially after India’s inbound tourism was hit hard by the global financial crisis as the number of tourists from the US and Europe dropped sharply.

The Indian government opened its tourism office in Beijing in 2008, aiming to woo more Chinese tourists. With the opening of the office, people-to-people exchanges started to pick up, which has helped to heighten awareness on both sides.

The Indian tourism office has a dedicated team of agents who have been trained to highlight India’s cultural and tourist attractions. As a result, Chinese traffic is picking up for resorts, yoga and religious tourism.

M.V. Babu, assistant director of the India Tourism Office in New Delhi, said that the tourism office has stepped up an advertising campaign for the Chinese market termed "Walk with the Buddha" to promote sites connected to the life of the religious figurehead.

"Buddhism has been the major focus of our promotional efforts to tap into the rising demand of Chinese tourists," Babu said.

In the meantime, Chinese tourism agencies are doing the same to explore the potential of the Indian market and to reduce their dependence on US and European tourists as sources of income.

Chinese tourism agencies have launched products such as honeymoon trips to Sanya, in Hainan province, to better cater for the demand of the Indian market where wedding budgets tend to be among the highest in the world.

Zhuge, of Sanya Holiday Travel India Ltd, said that more airline flights will be launched between major Chinese and Indian cities which could substantially increase the bilateral tourism volume.

The governments on both sides have also vowed to make the visa application process easier for each other in order to boost the number of travel groups.

According to the Chinese embassy in India, about 650,000 people, mainly business people, are involved in exchanges or travel between China and India each year, a very small number given the large populations of the two countries.

"The small number means that there is big room for growth," Zhuge said. "Like the Chinese, Indian tourists are increasingly choosing to see China for themselves."

Based on the current trajectory of growth, industry analysts said that the future of tourist travel between China and India, which together represent 40 percent of the world’s population, will continue to be promising.