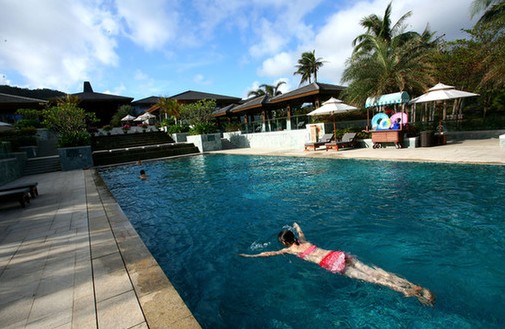 A visitor swims at a beach resort in Shimei Bay, Hainan. Local authorities
said they will step up efforts to ensure that hoteliers abide by price regulations.
Hotel room rates in China’s beach resort of Hainan island during the upcoming traditional Chinese festival are set to remain stable following recent moves by the provincial government to curb price hikes by hoteliers.

The price regulation is an initiative by the local authorities to rebuild Sanya’s reputation as the preferred island destination for foreign and local tourists.

Hoteliers are not permitted to raise room rates by more than 10 percent from the average rates in Jan 27, 2009. Sanya is a popular getaway destination for Chinese northerners to escape winter.

For room rates over 5,500 yuan ($834) per night – excluding those at suites and villas – it has to first gain approval from local authorities, according to a circular issued by the provincial price control bureau.

"Skyrocketing room rates have led to a sharp and abnormal fluctuation during last year’s Spring Festival, causing extremely negative impact on the image of local tourism. As a result, hotel occupancy rate declined and more consumers filed complaints," the provincial price bureau said on its website.

"Tourism is not a once-off deal, but a long term development."

By Jan 1, the Sanya pricing bureau had approved room rates of 139 hotels for this year’s Spring Festival. The approved room rates are published online with the highest room priced at 6,600 yuan per night. Suites and villas are not included in the regulation.

"Unreasonable prices will only push tourists away," said an official at the charging office of the bureau.

"Intervention will help the island rebuild its image."

The InterContinental Sanya Resort – which has 343 rooms including villas, suites and standard rooms – said it will adjust its standard room rates according to the government’s policy. But most of its rooms – villas and suites which are not included in the scope of the regulation – will be rated based on market price.

Wang, who is InterContinental Sanya Resort’s public relations manager, considers it normal for the hotel to raise prices during peak seasons. "It is very natural for hotels to raise its room rates during international games events or a festival," he said.

During the upcoming holiday season, local authorities said in a circular that it will enhance its monitoring works to ensure hoteliers abide by the recent price regulation.

Taxi and seafood restaurant operators will also be scrutinized during the holiday season to ensure stable prices, the circular added.

SOURCE: China Daily
Read more:
Cost for Sanya tour to remain at normal level during 2011 Spring Festival
Editorial Message
This site contains materials from other clearly stated media sources for the purpose of discussion stimulation and content enrichment among our members only.
whatsonsanya.com does not necessarily endorse their views or the accuracy of their content. For copyright infringement issues please contact editor@whatsonsanya.com.