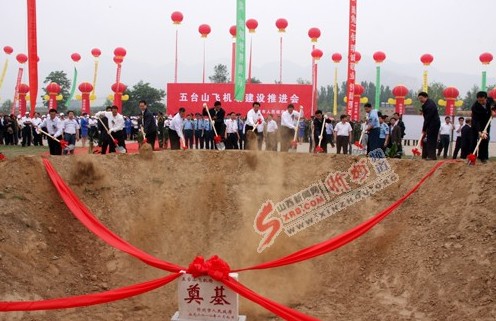 A groundbreaking ceremony marks the construction of a new
airport at Wutai Mountai, one of China’s key Buddhist mountains.
Authorities in North China’s Shanxi province will build an airport at Wutai Mountain to facilitate Buddhists and tourists visiting one of China’s most important Buddhist mountains.
Construction of the airport will start in June and is expected to finish in December 2012, said Zhang Zhongyuan, general office director of the airport construction headquarters.

Located in Dingxiang county, 70 km southwest of Wutai Mountain, the airport can allow the landing of 40- to 50-seat regional aircraft as well as larger craft such as the Boeing B737.

Construction costs of about 476 million yuan ($71 million) will be co-funded by the central and Shanxi governments, China News Service reported on Wednesday.

The average annual passenger flow is expected to reach 350,000, according to official estimates.

In 2009, about 3.3 million people visited Wutai Mountain, a UNESCO World Heritage site and a sacred Buddhist site located in Wutai county of Xinzhou, a city in northeastern Shanxi.

The mountain is home to more than 50 temples, including Nanchan Temple and Foguang Temple built in 782 and 857 – the two oldest existing wooden buildings in China.

Wutai Mountain is one of the four famous Buddhist mountains in China. The other three mountains have airports either in operation or under construction.

"The airport could provide a more convenient and faster way for Buddhists making pilgrimages to the mountain, especially for Buddhists from South China, who make up a large portion of the visitors," said Jiao Jinqi, deputy director of the information center of Wutai Mountain.

Despite some netizens worrying that more tourists would put pressure on the protection of the site, Jiao said there is no need for concern as the capacity of the mountain, covering an area of more than 300 square kilometers, is high.

Next news: Investigation launched after tons of shrimp die mysteriously in Haikou