Updated: 2010-11-16 00:00:00
Hainan Airlines to order Comac C919 at Airshow China in Zhuhai (Nov 16 – 21)
Hainan Airlines has joined the line-up of carriers that will place the first orders for the Comac C919 airliner this week while banking giant ICBC also negotiates to buy the aircraft.

Contracts from China’s three biggest airlines, General Electric Commercial Aviation Services (Gecas) and China Development Bank are also expected among the batch of first orders, which will total about 100, or possibly 120, and be announced at Airshow China in Zhuhai this week. 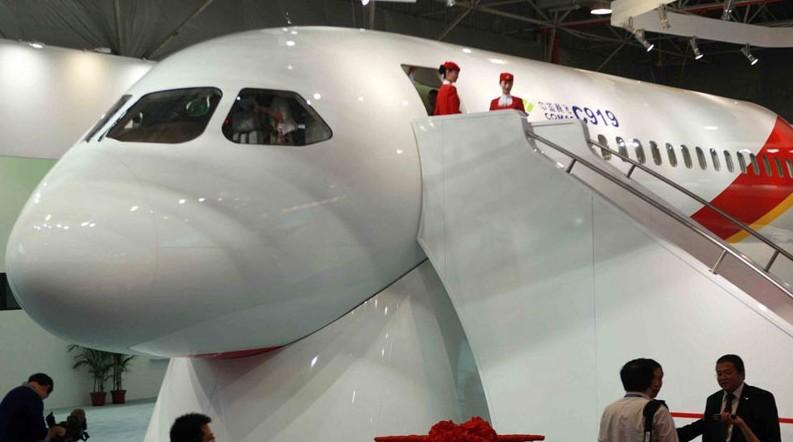 The Comac C919 at Airshow China in Zhuhai
They will not, however, be launch orders. The C919 was launched without orders in 2008. It is a national project, not a fully commercial one.

Industry executives have previously said that China’s three biggest airlines – China Southern, Air China and China Eastern – would be the first customers for the C919. They belong to the central government and must accept its direction to buy the aircraft.

Hainan Airlines’ participation is a little more surprising because it is affiliated with the provincial government of Hainan. Placing an order for C919s will help it to curry favor with the authorities in Beijing, however.

The big three appear to have trimmed their exposure to the program since June, when executives said they had agreed to order 100 C919s between them, and then only after persuading the government not to make them take more of the unproven aircraft from the inexperienced manufacturer.

Each of the big three will now sign contracts for 20, as will Hainan Airlines, says one executive. China Development Bank and General Electric, part owner of C919 engine supplier CFM International, will order about 10 each.

Industrial and Commercial Bank of China (ICBC) wants to order 20 C919s but its contract may not be announced at the air show.

The two banks are affiliated with the central government and seek to buy C919s for leasing businesses.

The order from Gecas will help persuade the U.S. Federal Aviation Administration to support certification of the aircraft, as it has been doing with the Comac ARJ21 regional jet, which the U.S. lessor has also ordered. The Civil Aviation Administration of China will be the certifying authority for both aircraft, but FAA validation of the Chinese certification will open up the international market for them.

The C919 will enter its main development phase next year, says Tian Min, chief financial officer of Comac. That coincides with the plan to wrap up the joint definition phase, conducted by Comac and its suppliers, by Dec. 31. One program source is unsure that this year’s work can be completed on time, however. Supplier selection, due by January, ran at least six months late and so the project is trying to make up time.

That executive has no great concern for the program’s ability to deliver its first aircraft as planned in 2016, after a first flight in 2014 and an eight-year development effort. But others say that a failure to meet the schedule would not be surprising – especially after the troubles that Boeing and Airbus have had with recent projects.

Comac itself is struggling with the much delayed ARJ21 regional jet, whose certification is now due next year.

"Certification of the regional jet will lay a solid foundation for the C919," says Tian.

Comac has set up a research center in Beijing but most of its facilities remain in Shanghai, the company’s home town, Tian told the China International Aerospace and Aviation Conference. Large numbers of foreign specialists have been employed, he adds.

That last point underscores the lavish funding that the C919 is enjoying, since luring highly skilled foreigners will be extraordinarily expensive by Chinese standards. The company’s Chinese engineers are also very well paid.

Less than 2% of commercial aircraft flying in China have been built in China, says Zhang Hongying, director general of airworthiness at the Civil Aviation Administration. The government wants to encourage Chinese airlines to buy domestically made aircraft, he says, pointing out that the administration contributed to this effort by licensing Joy Airlines. That carrier is owned by Avic and operates the manufacturer’s MA-60 aircraft.

SOURCE: Aviation Week
Editorial Message
This site contains materials from other clearly stated media sources for the purpose of discussion stimulation and content enrichment among our members only.
whatsonsanya.com does not necessarily endorse their views or the accuracy of their content. For copyright infringement issues please contact editor@whatsonsanya.com.

Next news: Vegetable prices rise by 62.4% in Haikou & other 35 Chinese cities