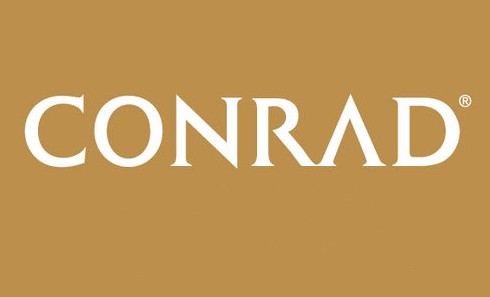 With a presence today in key cities and resort destinations including Tokyo; Hong Kong; Bali, Indonesia; Brussels, Belgium; Maldives; Chicago; and Miami, Conrad Hotels & Resorts is expanding to several more gateway cities and exclusive leisure destinations around the world. In the next 14 months Conrad will welcome hotels and resorts in Sanya Haitang Bay, China; Koh Samui, Thailand; Algarve, Portugal; New York; and Dubai, United Arab Emirates. An additional eight hotels and resorts will open by end of 2013. As a result of this growth, Conrad Hotels & Resorts is expected to double in size over the next three years.

"The expansion of Conrad Hotels & Resorts further into the Asian market as well as to our growing markets, such as the United States, are strategic milestones for us," said John T. A. Vanderslice, global head of luxury and lifestyle brands, Hilton Worldwide. "Offering a world of style, service, and connection, Conrad Hotels & Resorts are designed for today’s affluent traveler, which means providing the services and amenities needed for our guests to enjoy the luxury of being themselves."

Ian Carter, president, global operations and development, Hilton Worldwide, added, "We are strategically growing the Conrad brand by adding new-build hotels and resorts and smartly converting existing hotels to the brand. These forthcoming hotels will share the Conrad spirit of individuality and commitment to service and will further advance the brand’s reach in the world’s premier locations and most sought-after resort destinations."

Whether it’s a thriving urban environment or an exclusive island retreat, all existing and future Conrad Hotels & Resorts are committed to offering contemporary travelers the same experience – "The Luxury of Being Yourself" expressed through the brand’s attributes of:

•A World of Style – Contemporary design, inspired by our guests’ global travels and reflective of the local culture and heritage. Dramatic, clean, sweeping lines and stylish design at every exquisite view are accented with beautiful artwork and energized public spaces.
•Flawless Service – Anticipatory and discreet, Conrad service is tailored to individual guests’ needs. It is ultra-consistent in delivery and is there at the very moment it’s required. With Conrad, travelers can be at their very best every vital moment of the business day.
•Connections – Conrad hotels are on the pulse of a high-tech business world creating an atmosphere that is conducive to connecting with other guests, with oneself or simply with the local culture.
In the next three years, Conrad Hotels & Resorts will welcome the following new destinations:

The Conrad New York will be the brand’s fifth property to open in the United States and the first Conrad hotel in New York City. The hotel’s 463 luxury rooms will average 550 square feet, a significantly larger than normal size for Manhattan hotels. The Conrad New York will be located at the current site of the Embassy Suites New York, in New York’s Financial District, adjacent to the Hudson River and the currently rising Freedom Tower. The hotel will feature a restaurant and bar, 17,000 square feet of flexible meeting space, and a soaring, sunlit 15-story atrium with a dramatic Sol LeWitt art piece rising 13 floors above the check-in desk.

A 66-villa Conrad resort located on the luxurious beach destination of Aow Thai Beach in Koh Samui, Thailand. Around 500 miles south of Bangkok, the resort’s westerly orientation will offer guests memorable sunset views and the natural slope of the site will allow for uninterrupted 360-degree views of the ocean and the surrounding natural environment. Each villa at Conrad Koh Samui Resort & Spa will have a private plunge pool and sundeck area and the resort will have two restaurants, a lobby lounge, destination bar and spa facilities.

The 158-room resort, located on the beautiful coastal region of Algarve, will be the first Conrad hotel in Portugal. The hotel will have two restaurants, a sport bar, a "sensation" pool and separate infinity pool with bar. The Conrad Algarve Palacio Da Quinta’s spa will offer Scandinavian-inspired treatments and separate fitness center.

The 559-room Conrad Dubai will be located on a 50,000-square-foot site on the famous Sheikh Zayed Road in the central business district of Dubai. The hotel will be a key component of a mixed-use development that will also house signature office and retail space. The Conrad Dubai will be strategically located 20 minutes from the Dubai International Airport, close to the Dubai World Trade Center, International Convention Center, Dubai International Financial Center and nearby a newly built Dubai Metro System Station. The hotel will offer three restaurants, two lounge bars, a destination bar, grand ballroom, meeting rooms, health club, pool, spa and fitness center.

The 460-room Conrad Seoul will be located in the Seoul International Finance Center, which is a first-of-its kind 5.7 million square-foot, mixed-used complex in South Korea. In addition to three A-grade office towers and a luxury retail mall, the SIFC will be located in the Yeouido Business District, South Korea’s government and financial center and home to the National Assembly Building, Korea Stock Exchange and headquarters of LG. The Conrad Seoul will have three restaurants, a lobby lounge, separate bar, 14,000-square-foot ballroom, seven meeting rooms, health club & spa, swimming pool and business center.

Located in China’s Liaoning Province, the 153-room Conrad Dalian will be situated in the city’s new central business district, a base for a number of Global 500 companies and the international conference center, an art gallery, theater, yacht club and upscale office buildings, retail space and luxury apartments. Built on Dalian’s local waterfront and international cruise ship terminal, the hotel will be in a tower shared with the Hilton Dalian, boasting unobstructed panoramic views of the sea. The Conrad Dalian will feature two restaurants, lobby lounge, bar, ballroom, meeting and boardrooms, health club, spa, swimming pool and business center.

The 325-room Conrad Beijing will be located in the city’s central business district, near the recently built China Central TV Tower, many of Beijing’s renowned tourist attractions and by the Chinese headquarters of numerous international businesses. The hotel will offer four restaurants, including a roof restaurant and bar, lobby lounge, tea lounge, health club, spa, swimming pool, business center and over 21,500 square feet of meeting space.

Less than an hour from Fiji’s International airport, the Conrad Fiji Resort & Spa will be located on the beautiful resort island of Naviti in Fiji’s Yasawa group of Islands. The resort will offer 100 two-bedroom suites on a hotel complex also housing Hilton and Doubletree resorts. On the secluded western site of the island, the resort will feature Qwe Beach, an amphitheatre shaped beach that has 180-degree views of the ocean and easy access to the Island’s lagoon and reef. The Conrad Fiji Resort & Spa will be adjacent to an 18-hole golf course and offers two restaurants, a pool bar, lobby bar, and a dedicated health spa and fitness center.

The 306-room Conrad Guangzhou will be in China’s third largest city, which is located the Pearl River Delta, China’s primary economic powerhouse and the capital of its exporting economy. In the heart of the city’s new central business district, the Conrad Guangzhou will be nearby future high-grade office towers, upscale retail and residential developments, and new public infrastructure such as parks, an opera house, a museum and the city library. The hotel will offer four restaurants, two bars, health club, spa, swimming pool, business center and an 18,000-square-foot ballroom.

The 80-villa Conrad resort will be nestled in Ubud, the natural beauty and arts center of Bali. Built on a prime hillside above the famous Ayung River, the resort will be located 20 miles from the Bali’s Ngurah Rai International Airport. At Conrad Ubud Resort and Spa each villa will have its own private plunge pool and the resort will offer two restaurants, lobby lounge, bar, meeting rooms, luxurious spa, health club and multiple swimming pools.

Just three miles from the international airport, the 245-room Conrad Mumbai will be located in the local state capital, the country’s commercial capital and largest city in India. The beach-facing hotel will be nestled in a premium Indian residential area and will offer three restaurants, lobby lounge, café, bar, health club, spa, outdoor swimming pool, large ballroom and multiple meeting rooms.
SOURCE: Business Wire
Read more:
Gerd Knaust appointed as GM of Hilton’s Conrad & Doubletree, Sanya
Editorial Message
This site contains materials from other clearly stated media sources for the purpose of discussion stimulation and content enrichment among our members only.
whatsonsanya.com does not necessarily endorse their views or the accuracy of their content. For copyright infringement issues please contact editor@whatsonsanya.com

Previous news: Expats in Sanya to be included in China’s once-a-decade census