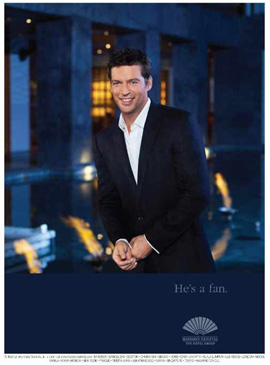 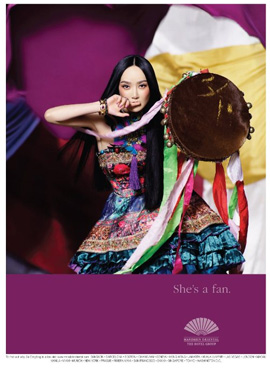 Mandarin Oriental’s USD multi-million global print advertising campaign "He’s a Fan/She’s a Fan", continues to gather ‘fans’ from around the world. This year, the Group is delighted to add three new fans to the tally of celebrities who regularly stay at Mandarin Oriental hotels.

Gifted international singer, songwriter, pianist and actor Harry Connick, Jr., often referred to as the Frank Sinatra of today, has received a multitude of accolades over his career. These include three Grammy awards and an Emmy, as well as several acting nominations. Connick is a particular ‘fan’ of The Landmark Mandarin Oriental, Hong Kong, where he performed in 2009 to a spellbound audience at an intimate evening in the hotel’ stylish MO Bar. He cites the property as "one of the greatest hotels I’ve ever stayed in." Mary McCartney, the Group’s official campaign photographer, captured Connick in the tropical surrounds of Mandarin Oriental, Sanya.

The elegant and graceful French pianist, Hélène Grimaud was photographed near to her home in Switzerland. Grimaud performs at concerts worldwide, and has the unusual gift of experiencing synaesthesia (seeing music as colour). She particularly enjoys staying at Mandarin Oriental Hyde Park, London, as she often performs in the city’s famous music venues. Grimaud discovered the piano at the age of seven, and launched her professional career at the age of 18 with a solo recital in Paris. She is also known for her passion for wolves, which she both studies and raises.

Rising star Sa Ding Ding was born in Inner Mongolia and is a powerful and sophisticated singer, musician, composer and choreographer. A product of modern China, she melds Eastern and Western music, even singing in Sanskrit and Tibetan, and has created her own language where new words are formed from the emotions evoked by music. McCartney’s portrait of the performer beautifully captures her colourful and vibrant personality and was taken during a recent tour in the UK, where the singer was a guest of Mandarin Oriental Hyde Park, London. Sa Ding Ding’s newest album is entitled ‘Harmony’.

The campaign which is the creation of advertising gurus, Alan Jarvie and Michael Moszynski, who head up LONDON Advertising, continues to increase Mandarin Oriental’s brand awareness globally.

The campaign simply and elegantly connects Mandarin Oriental’s well-recognized symbol – the fan – with international celebrities who regularly stay at the hotels and are true fans of the Group.

Earlier additions to the campaign were photographed by celebrated photographer and British royal, Lord Patrick Lichfield who sadly passed away in 2005. The Group appointed renowned portrait photographer Mary McCartney in 2006 who photographs each celebrity in a location of their choice which, for them, best represents a feeling of well-being.

In appreciation of their support, the Group makes a donation to each celebrity’s individual choice of charity.

"We continue to be delighted with the campaign, which celebrates 10 years this year, and believe it makes a strong statement about our Group in a simple and luxurious manner.

By focusing on celebrities who clearly appreciate the finer things in life, we have been able to show the quality of our hotels in a far more interesting way than traditional hotel advertising", says Jill Kluge, Mandarin Oriental Hotel Group’s Director of Brand Communications.

Next news: Hainan may bid for Luxemburg Pavilion at Shanghai World Expo