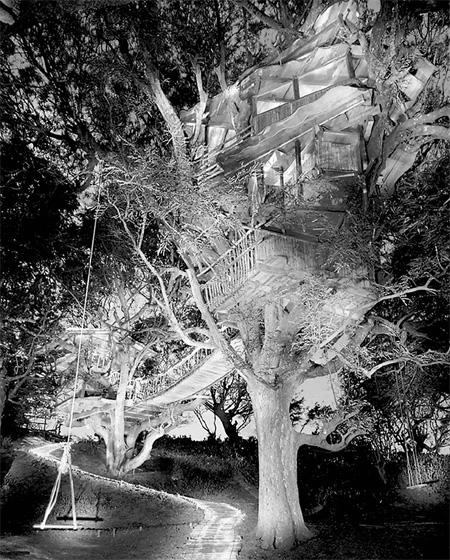 Greenberg’s tree houses follow the contours of the
tree and captures the natural energy flow or qi. 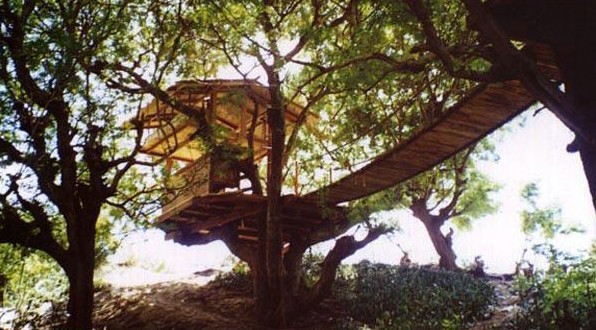 Sanya Nanshan Treehouse Resort and Beach Club
Self-proclaimed ‘anti-architect’ David Greenberg has unconventional ideas about how houses should be built. Sun Li talks to him about his treetop resort in Hainan.

As Western-style buildings proliferate in cities all over China, US architect David Greenberg is trying to introduce ideas based on Zen Buddhism, Taoism and Chinese geomancy or feng shui in his projects here.

The self-proclaimed "anti-architect" stood out easily from the other participants of the Fourth International Ecopolis Forum in Chengde, Hebei province, where he presented his thoughts in cut-to-the-chase, non-pedantic language.

He was also the only foreign guest using a calligraphy brush to sign his Chinese name.

"Chinese urban designers should start looking at their traditional courtyards and not merely copy Western architecture, most of which takes away from nature," he adds.

Here, he not only offered a spectacular view of the South China Sea, but also built a walkway connecting treetop rooms, ensuring that the flow of positive energy, or qi did not slip out to sea. 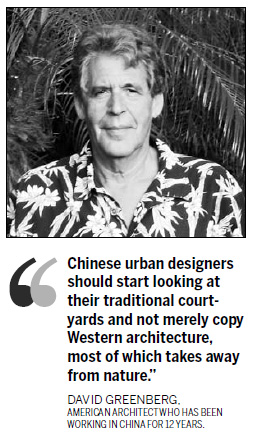 David Greenberg
Greenberg’s original tree houses even excluded electricity in an effort to create a truly natural living environment, but the developer eventually capitulated to comfort and added electricity to accommodate guests interested in nesting up in the trees.

Within just three years, the Hainan green hotel has already had 5,000 tourists.

Greenberg’s masterpiece in Hainan follows a similar project in Maui, Hawaii, where he first encountered Zen Buddhism more than a decade ago.

He was reading The Way of Zen by Alan Watts at the time. One day early in the morning, he was still half asleep when he met a monk who greeted him with: "I’ve been waiting for you to wake up."

"Although I was bleary-eyed and hazy, I somehow knew Master Chang meant it both literally and figuratively," Greenberg says. "It was then I knew I wanted to learn how to design treehouses that were Zen."

Zen philosophy holds that the attempted control of nature by human is meaningless. Guided by that principle, Greenberg’s vision of tree houses harmonizes with the natural landscape.

The design is based on the shape of the tree itself, rather than on the architect’s blueprint, he says, and in it existing branches turn into a spiral stairway and other branches form a natural hammock.

Aloft in the tree, guests bask in sunshine and moonlight while listening to the soothing rustle of the leaves in the breeze.

As Greenberg practiced meditation under Master Chang, his teacher suggested he also get to know Taoism.

"I think Taoism and Zen Buddhism overlap in their respective attitudes toward nature, an attitude reflected in my work in China," says Greenberg.

As consultant and lead designer, Greenberg has been working in China for 12 years, traveling across Beijing, Shenzhen, Chongqing and other cities.

"China provides a free environment for architects. We’re not impeded by the complicated regional planning and bureaucratic red tape," Greenberg says. "Most importantly, China has great craftsmen who can help me visualize my architectural concepts."

The next stop for Greenberg is Anji, Zhejiang province, where he is going to present a design that is ecologically friendly, with a low-carbon footprint.

Next news: Hainan may bid for Luxemburg Pavilion at Shanghai World Expo