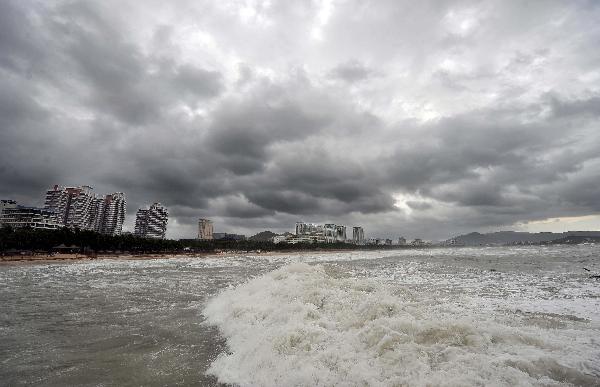 Photo taken on Aug, 24, 2010 shows the waves on the beach in Sanya,
south China’s Hainan Province. High tides and big waves were seen on the
sea water near Sanya due to a strong tropical storm named "Mindulle" Tuesday.
HAIKOU, Aug. 24 (Xinhua) — Although it didn’t make landfall as expected in China’s southernmost province of Hainan, the fifth tropical storm of the season, "Mindulle," brought heavy rains, disrupted traffic and stranded passengers in the island.

"Mindulle," which means dandelion in Korean, entered the Beibu Gulf in the South China Sea at 5 a.m. Tuesday and is heading for Vietnam, the local weather bureau reported Tuesday.

Six flights at Hainan’s Sanya Phoenix International Airport were canceled Tuesday due to the tropical storm.

Ship services across the Qiongzhou Strait between Hainan island and Guangdong Province’s Leizhou Peninsula have been suspended.

The tropical low pressure system was intensified into a tropical storm at 8 a.m. Monday.

The eye of "Mindulle" was located at 18.0 degrees north latitude and 107.8 degrees east longitude at 5 a.m. Tuesday and its wind speed was 30 meters per second, the Hainan Provincial Meteorological Bureau said.

The storm is moving northwest at a speed of 20 kilometers per hour towards Vietnam and is expected to make landfall on the northern coast of Vietnam Tuesday night.

The provincial maritime bureau issued a sailing ban at 6:30 a.m. Monday on passenger and cargo ships unable to withstand winds of up to 60 km per hour.

More than 20,000 fishing boats have been called back to port because of "Mindulle," a statement issued by the bureau at 10 a.m. Monday said.

The intensity of the tropical storm will fall after its landfall in Vietnam.